The next version of Google’s operating system, which for time being is called as Android O has recently been up with its beta version. The company has now announced that it will reveal Android O on Monday i.e 21st August. Google has apparently put up a dedicated web page where it shows the countdown before it officially reveals Android 8.0.

Interestingly, the company is connecting it with the coming solar eclipse, where the new operating system will be revealed as soon as the sun blemishes in the sky. The countdown webpage reads:

“On August 21st, a solar eclipse will sweep across the entire United States for the first time since 1918. Android is helping you experience this historic natural phenomenon so you can learn more about the eclipse and count down to the big day—when you’ll meet the next release of Android and all of its super (sweet) new powers, revealed via livestream from New York City at 2:40PM ET.”

So as per the count down the unveil is scheduled on 21st August at 2:40 PM ET in New York.

Until now, it was highly assumed that Android O will be named ‘Oreo’ following the tradition of naming it after food products, which now seems to be turning true. Google might just have spilled the secret regarding the name of the latest version of its Android operating system. On Friday, Google shared a post on Google+ which included a video teaser file called “GoogleOreo_Teaser_0817_noDroids (1).mp4,” indicating that the previously made assumptions about the name Android Oreo might be true. 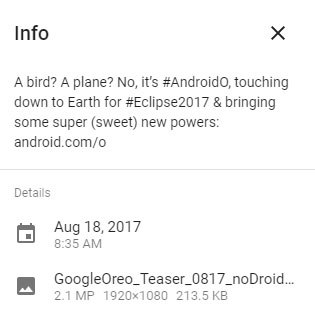 However, this could have been a mistake or a placeholder, but as per the reports, shortly after the post appeared, Google took down the promo video and replaced it with the same one but with a different file name, ‘OctopusTeaser.mp4′, most probably to keep things hidden for a while. 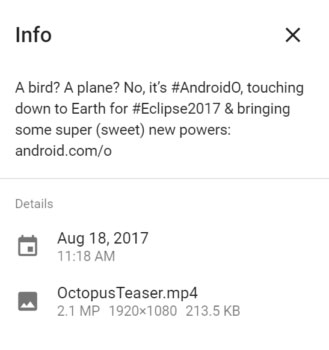 Moreover, the connection with the solar eclipse could also lead to a possibility which relates to the popular cream cookie desert, as the black disc of an Oreo, covering its white creamy filling, looks like the moon covering the sun during an eclipse. In any case, all the theories and assumptions go as far as our imagination and we’ll have to wait for a couple of more days before we get to know the exact name.