Google announced a lot of new goodies at the Google I/O 2016 event in Mountain View, but one of the most important was the launch of Android Wear 2.0.

Android Wear 2.0 is a big update to Google’s wearable platform since its launch two years back. Android Wear apps can now access the internet directly over Bluetooth, Wi-Fi, or cellular connection as they don’t rely on the Data Layer APIs. It now allows receiving push messages via Google Cloud Messaging, accessible directly on the watch.

The update also comes with a number of UI changes that will help users interact with the app more easily. A new notification design and app launcher make it easier to take action on notifications and launch your app, also a new watch face picker makes switching watch faces fast and fun. Android Wear 2.0 will also offer smart replies, handwriting support, and even a keyboard. 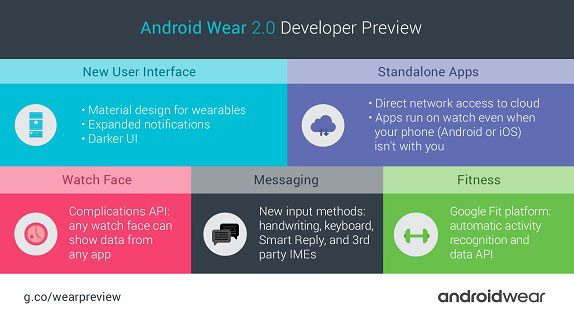 In case of fitness improvements, Android Wear now makes it easier to develop apps that use fitness data and detect activity. It gets the Activity Recognition features of Google Fit. Finally, Android Wear apps can now take advantage of the latest Android N features such as Data Saver, Java 8 Lambda support, and new emojis.