Apple has scheduled an event on October 27th, where it is most likely to upgrade its MacBook Pro lineup. But, before the launch day, the new MacBook Pro has been leaked in images in the macOS Sierra 10.12.1 security update. The leaked images showcases OLED touch panel which might be known as the Magic Toolbar as well, and a Touch ID sensor.

The leaked images were first seen on MacRumors, which shows how the Touch ID can be used for payment on Apple Pay. The OLED touch panel is located on top of the keyboard replacing the row of function keys. As we can see in the image, the Touch ID is seamlessly integrated right next to the OLED screen, in place of the power button. 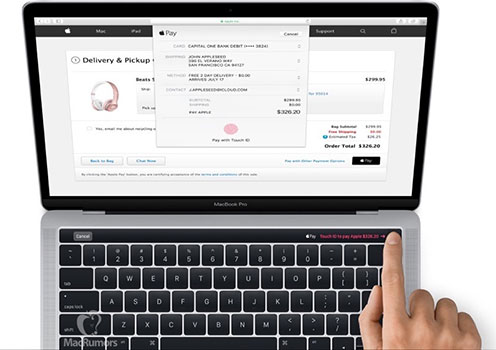 In the image, Apple Pay dialog is depicted, asking a customer to confirm a purchase with a finger on the panel. The image also reveal that the speakers are situated at both ends of the keyboard on the new MacBook Pro.

The new MacBook Pro is expected to be the most significant upgrade among the entire Mac lineup. It is said to be lighter and thinner than its predecessors, and also be powered by Intel’s Skylake generation processors. As per the previous reports, the new MacBook Pro will be deprived of the traditional USB ports, MagSafe and Thunderbolt 2.

Talking about MacBook Air, Apple might kill the 11-inch variant in favour of the 13-inch with addition of USB-C support. Apple is expected to refresh the iMac lineup as well and also introduce a new 5K (5120 x 2880) external display which comes equipped with a built-in GPU.

The ‘hello again’ event of Apple is scheduled for tomorrow i.e October 27th and starts at 10:00 am PT (10:30 PM IST). It will be interesting to see which products will be unveiled at the event. Stay tuned for more updates!