Dell has launched a new hybrid laptop in its XPS series, dubbed as ‘Dell XPS 2-in-1’ at CES 2017. The convertible laptop sports an InfinityEdge display, that allowed the company to fit a 13.3-inch display in the frame of an 11-inch laptop with just 5.2mm bezel around the screen.

The new Dell XPS 13 2-in-1 sports an aluminium body, a carbon fibre palm rest, and bears Corning Gorilla Glass NBT on the display. The hybrid is also compatible with the optional Dell Active Pen stylus. The display rotates 360-degrees allowing users to use it in four different modes viz, the Laptop, Tablet, Stand, and Tent Mode.

The Dell XPS 13 2-in-1 comes with 4GB of LPDDR3 RAM, although users can opt for 8GB or 16GB RAM configurations as well. The base model ships with a 128GB SATA SSD, while 256GB, 512GB, and 1TB PCIe SSD options are also available. The device also comes with a full-size backlit keyboard and an HD webcam. 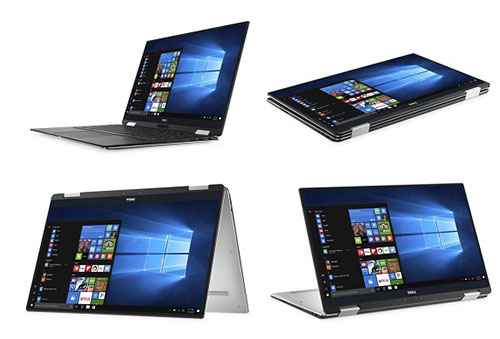 The XPS 13 2-in-1 has two USB Type-C ports, a Thunderbolt 3 port, a microSD card reader, a DisplayPort and a headphone jack. Connectivity options include Bluetooth v4.2, Wi-Fi 802.11ac, Miracast, and Intel Smart Connect technology. Instead of the Windows’s Hello face recognition feature, the XPS 13 2-in-1 comes with a fingerprint reader.

The Dell XPS 13 2-in-1 is backed by a 46WHr battery that promises 15 hours of backup with the Full HD display for productivity applications and 9 hours of Netflix streaming. It measures at 304x199x13.7mm, weighs in at 1.24kg and sports two Waves MaxxAudio Pro tuned speakers.

The Dell XPS 13 2-in-1 starts at $1000 (approx. Rs. 68,000) and will be available in the US starting from 5th January. However, there is no word about its Indian availability yet. Stay tuned for more updates!