Facebook has adopted yet another feature of its rival Snapchat for its Messenger app. The company has updated the camera of messenger app with almost similar features that you would see on Snapchat.

The update to the messenger’s camera brings many Snapchat-like features such as stickers, emojis, masks, etc. The shutter button is now placed at the centre of the screen, which is just one tap away – whether you are already in a conversation or have just opened up the app. A tap takes a photo, while a long press records a video.

With the new updated camera, you can add stickers and emojis on top of a picture or video. You can now add 3D masks and special effects as well, such as turning yourself into a holiday-appropriate reindeer. There is also a new picker that helps you find thousands of stickers, frames, masks and effects, added by the company in collaboration with artists around the world.

Facebook has not blindly copied the features from its rival as there are some improvements as well. For instance, you can add multiple ‘props’ to your images and basically create your own masks instead of being limited to the available presets. 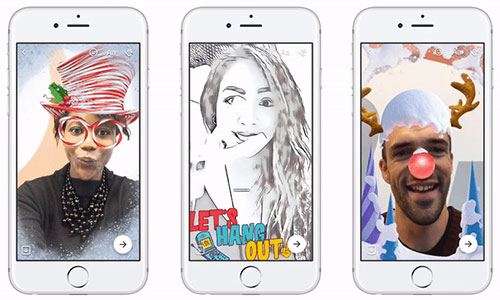 Along with above updates, Messenger now provides a palette button beside the camera button that provides users with artwork suggestions on the basis of the text written by them. Now, instead of having to choose a message thread first and then taking a picture or video, users can first shoot and then choose the contacts that they want to share their content with.

Facebook has gradually been building out Messenger by adding new features quite frequently. The camera update has begun rolling out for Android and iOS apps, but has not reached India yet. Stay tuned for more updates!