The Chinese smartphone manufacturer, Gionee may launch Elife S8 on February 22 at the MWC (Mobile World Congress) 2016, in Barcelona, Spain. The Gionee Elife S8 recently got spotted on GeekBench, a benchmarking website, with a model number ‘GN9011’ revealing its hardware and specs. 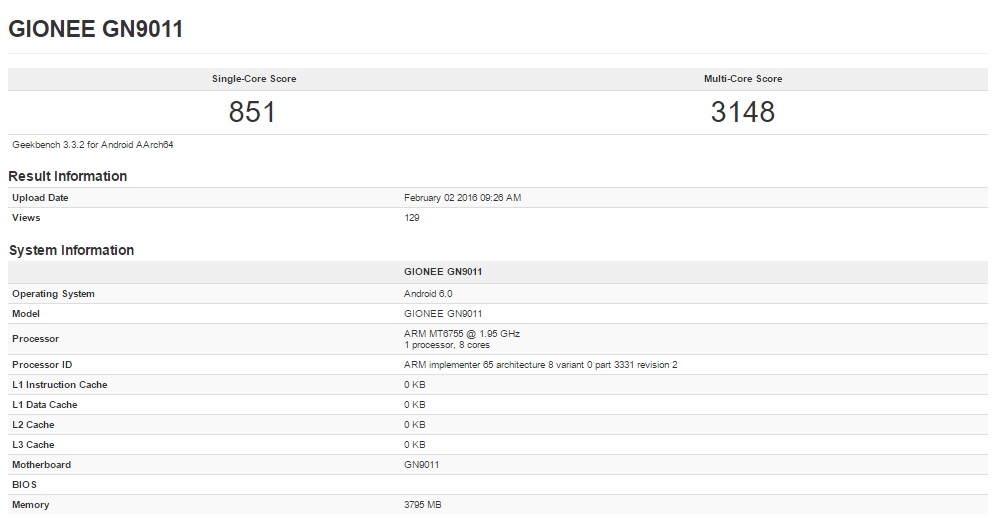 According to the listing on GeekBench, the Gionee Elife S8 may be powered by MediaTek MT6755 Helio P10 chipset with 4 GB of RAM. It said to run on Android 6.0 Marshmallow out-of-the-box. Although there are no other details revealed in the listing, we can still expect a stunning camera and Apple’s Force Touch like pressure sensitive display as Gionee has hinted it in its following statement:

“A new era of mobile photography has arrived and we welcome our consumers to explore this era together with joy in their hearts. We believe technology is part of our lives and we enjoy the convenience and creativity it brings. At MWC 2016, Gionee will introduce a new member to its S series – the Elife S8, an innovative mobile device that comes with hassle-free photo-shooting features and a pressure-sensitive display,”

To recall, Gionee has also launched the Elife S7, a predecessor to the upcoming S8 at last year’s MWC event only.