This year on April Fool’s day Google lets you play the ‘Ms. Pac-Man’ game on the Google Maps. It is not the first time Google did something of this sort. Google in 2015 also did the same by adding Ms. Pac-Man game to the desktop version of maps. That being said, it still is a whole lot fun to play Pac-Man within the Google maps in your smartphone or on computers.

To play the game, you just need to open the Google maps app on your smartphone and tap on the pink button towards right. The game will take you to a random location around the world unlike the 2015 version where your current location was turned in to a game level. 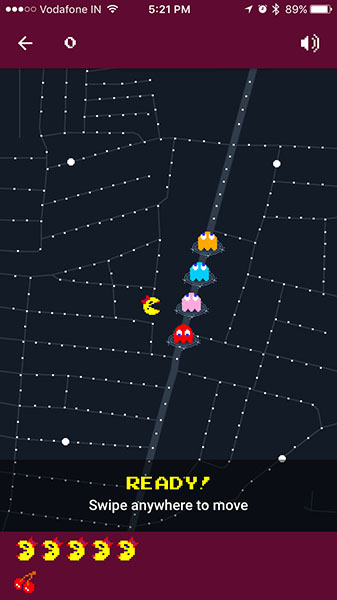 You get 5 lives to out the ghost on the maps of some random location. Some users also reported that the iOS version of the app lets you choose the location where you want to play.

Google, every year brings some exciting prank on April Fool’s day and this year’s thought went a couple of years back and Google redefined the old game. It would have been nice to see something new like Google does every time, never the less this Google map and Ms. Pac-Man mixture is very interesting and fun.