Google’s Pixel XL 2 smartphone has apparently been spotted on popular benchmarking portal GFXbench revealing some possible details about the smartphone. The Pixel XL 2 will be successor of previously launched Google Pixel XL and is expected to arrive later this year, some where around September or October.

As seen in the listing, the Google Pixel XL 2 is expected to come with a bigger 5.6-inches QHD (2560 x 1312 pixels) display with an aspect ratio of 18:9 to the screen which indicates that Pixel XL 2 will come with almost bezel-less display. Another interesting fact that comes up from the listing is that the smartphone could be powered by a Qualcomm Snapdragon 835 SoC which is justified considering current trend of flagship devices. The smartphone will come with 4 GB RAM and 128 GB internal storage but we can also expect other variants with different storage and RAM options. 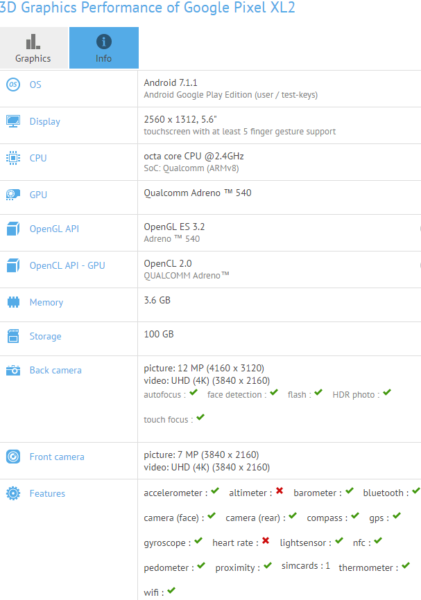 Coming down to the imaging department, the Pixel XL 2 is expected to come with a 12 MP rear camera along with 4K recording support. Considering the fact that Google has always given due attention to the camera in its smartphones, we are likely to see more advancement in Pixel XL 2’s camera. There’s also an 8 MP front camera on the smartphone, again with 4K recording support. Another possibility regarding the camera could be the availability of Dual rear camera like most of the flagship smartphones nowadays are coming with.

A while ago, it was reported that Google sold over 2.1 million units of its flagship Google Pixel and Google Pixel XL smartphones. With such kind of popularity the company will need to come with something more innovative to maintain the interest of buyers towards their smartphone. As per the sources, the alleged Google Pixel XL is already in the making and we’ll get to know more regarding the smartphone in the times to come.