Google is roaring at its Google I/O 2016 event, as the company has announced the two new apps, Allo and Duo. Allo is an instant text-messaging app while Duo is the mobile only one-one video calling app.

First, let’s talk about Allo, which is a new messaging app from Google that has its search engine built right into the app itself. This means you can now search anything, look up images, and more from directly within the app, which will save lots of efforts and time. The company also introduced a new feature which is called Whisper/Shout feature that will let you decrease and increase the size of your text by sliding up and down on the Send button. 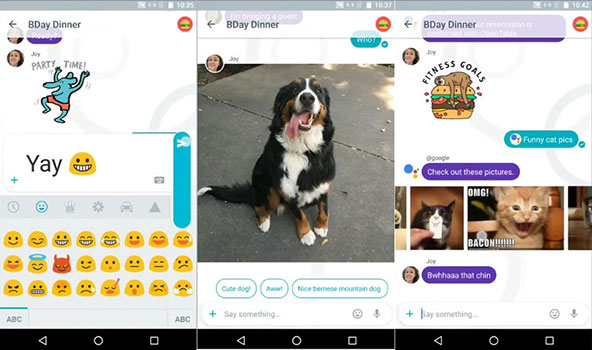 The Allo also comes with Smart Replies feature, which will suggest the reply for every message. For example, if you have received a kid’s photo, it will suggest reply like ‘Aww Cute’, etc. It also comes with several emojis as well as custom stickers. Allo allows users to register using their phone number and can even optionally link their Google id as well. It even has an incognito mode that provides end to end encryption for your chats as well as discreet notifications.

Secondly, we have Duo which is a simple, fast one-to-one video calling app, that can work seamlessly even if you have slow net connections. Video calls can go up to 720p HD video resolution with high-quality audio. However, its biggest feature is Knock Knock, which shows you a live video preview of the caller before you pick up so that you can get an idea of why they are calling.

Google says both Allo and Duo will be available this summer on Android and iOS. The company also introduced the Google Home, a voice activated home assistant at the same event. So are you guys excited for these new apps? Please tell us in our comment section below.