Huawei’s latest offering to the budget range of phones, the Honor 9 Lite, was launched today in India as a Flipkart Exclusive. The company announced the arrival of the phone, somewhere in the middle of last week. The phone, which like its premium counterpart Honor 9i, features a quad-camera setup, with a dual camera on the front and on the rear sides. The smartphone which was previously launched in the Chinese market, back in December last year has been launched in India in two variants of 3 GB RAM/ 32 GB storage and 4 GB RAM/ 64 GB storage, priced at Rs. 10,999 and  Rs. 14,999, respectively.

The Honor 9 lite will be available to the consumers in India on the 21st, 22nd and 23rd January, via flash sale at 12:00 am exclusively on Flipkart and will be available in Sapphire Blue, Glacier Grey, and Midnight Black color options. As an introductory offer, the Honor 9 Lite comes with a 10% cashback offer on the CitiBank cards. 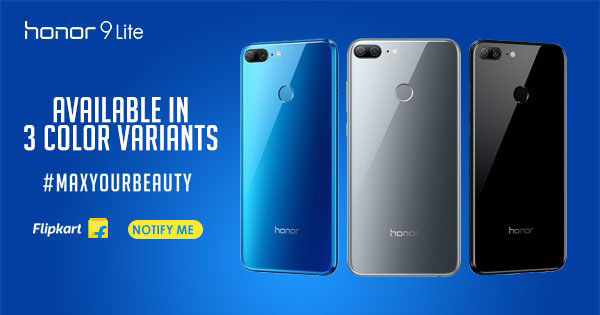 Talking about the specifications of the Honor 9 Lite, the dual nano SIM phone comes in a shiny unibody design. Within the metal chassis, the smartphone houses a 5.65-inch Full HD+ IPD display with 2160 x 1080 pixels resolution, 18:9 aspect ratio, 428 PPI pixel density, and 2.5D Curved glass. Both the variants will also be expandable up to 256 GB via microSD.

Talking specifically about the camera set-up on the phone, the Honor 9 Lite is equipped with a 13 MP + 2 MP camera set-up on both the front and rear sides with PDAF and LED flash. The Honor 9 Lite is dependent upon a 3,000 mAh battery for its power requirements, which by the claims of the company, offers up to, 20 hours of talk time on 3G, and a standby time of up to 576 hrs.

For network and connectivity, the Honor 9 Lite relies upon 4G VoLTE, WiFi 802.11 b/g/n, Bluetooth 4.2, GPS/ A-GPS, 3.5mm audio jack, and micro-USB with OTG support. The smartphone is also equipped with sensors such as an accelerometer, ambient light sensor, magnetometer, and proximity sensor. As for the weight and dimensions, the Honor 9 Lite measures 151 × 71.9 × 7.6 mm and weighs 149 grams.

Another announcement that was made during the launch event of the Honor 9 Lite was the company’s decision of opening 4 exclusive Honor Centers in India, to attend to their consumers’ needs, more effectively and in a more timely manner. The company also claimed to have more than 250 Honor service centers in the country.