The highlight of the Honor View 10 is that it comes with AI features, for which it relies upon a separate NPU (neural processing unit) that assists the smartphone in its AI-based tasks such as translation and camera-based functions. With these features provided, the users can get intelligent scene recognition, object recognition, motion detection, portrait mode and facial beautification as well. With the help of its sub-millimeter accuracy feature, the Honor View 10 is capable of making a 3D reconstruction of your face with point cloud accuracy and allows you to unlock your phone with payment level security within seconds. 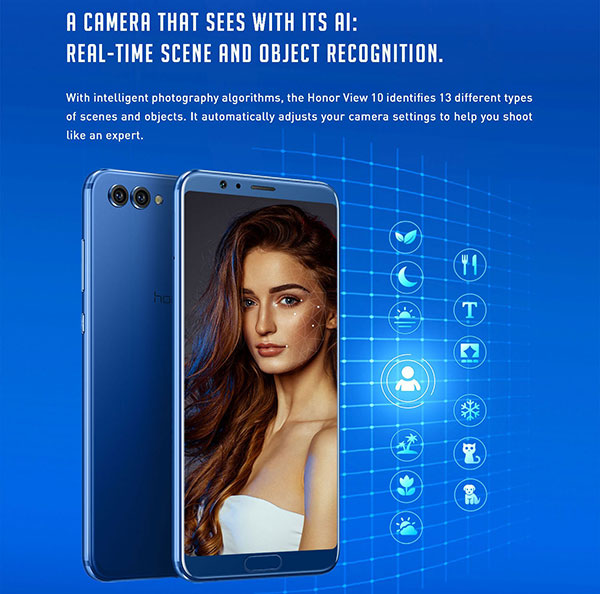 Delving further into the specifications of the phone, the Honor View 10  features a 5.99-inch full-HD+ (1080 x 2160 pixels) IPS LCD FullView display with 18:9 aspect ratio. The smartphone is powered by a 2.36 GHz HiSilicon Kirin 970 SoC, coupled with 6 GB of RAM. It comes with 128 GB of internal storage, which is expandable up to 256 GB via microSD. The phone comes with Android 8.0 Oreo out of the box, with EMUI 8.0 running on top. For optics, the Honor View 10 relies upon a dual camera setup on the rear with a 16 MP RGB sensor with f/1.8 aperture, PDAF and a 20 MP monochrome sensor along with a dual LED flash. While it’s equipped with a 13 MP camera with f/2.0 aperture for selfies on the front.