The upcoming flagship smartphone from HTC, allegedly called as the HTC U 11 is all set for its launch on 16th May. Leaks continue to flow regarding the smartphone even with few days left to launch. The smartphone has recently been spotted in the listing of popular benchmarking website AnTuTu. Apart from this, the graphic of its retail box has also been leaked, revealing the key specifications of the smartphone.

According to the leaks the HTC U 11 sports a 5.5 inch QHD+ display with Corning Gorilla Glass 5 protection and has got a Qualcomm Snapdragon 835 processor under the hood, similar to what it was mentioned in the previous leaks. The device seems to be coming in two variants, one with 4 GB RAM and 64 GB internal storage and another with 6 GB RAM and 128 GB internal storage which is expandable up to 2TB via microSD card. The HTC U 11, as per the listing on AnTuTu is running on Android 7.1.1 Nougat. 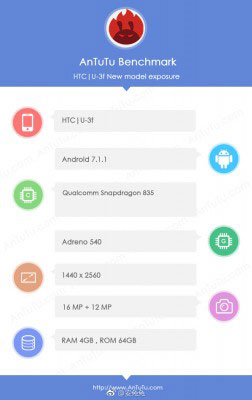 Also read: HTC U 11 spotted on Geekbench listings; hints at a powerful performance head to head with Galaxy S8

As far as the imaging department is concerned, the smartphone will hold 12 MP f/1.7 rear camera with OIS, HTC’s “UltraPixel 3” and “UltraSpeed AF” brandings as it appears on the graphics. The HTC U 11 will sport a 16 MP front camera with f/2.0 aperture and panorama.

Other features of the smartphone include, the emphasised Edge sense feature that interprets different Squeezable gestures into various commands. Apart from this, there is NFC, Wi-Fi ac, HTC BoomSound, and HTC’s Usonic headphones with active noise-cancellation. The HTC U 11 will also come with IP57 rating for water and dust resistance along with a fingerprint scanner and a 3,000 mAh battery with Quick Charge 3.0 support.