As we know, HTC has scheduled the ‘for U’ event on 12th January, where it is expected to announce new smartphones, most likely the HTC U Ultra (codenamed Ocean Note), HTC U Play and HTC X10. However, just ahead of the event, the HTC U Ultra aka Ocean Note is leaked in live images.

According to the leaked images, it looks like the HTC U Ultra aka Ocean Note will sport a secondary display, just like on LG V20. The secondary display has notifications, weather updates, date and time, and battery percentage. It seems to sport a metal body with 2.5D glass on the front and back.

At the back of the device, the bump of the rear camera is quite noticeable, which is equipped with dual-LED flash and laser auto-focus sensor. There is a speaker grill at the bottom edge, along with a primary microphone and USB Type-C port. While, the top edge sports secondary microphone and SIM card slot. So, it is confirmed that there is no 3.5mm headphone jack on this device.

The phone can be seen in White, Black, Blue and Pink or Rose Gold. colors in the leaked images. It is tipped to run on Android 7.0 Nougat, powered by Snapdragon 821 SoC and come with 4GB RAM and 64GB internal storage. The phone is also tipped to sport the same 12.3MP Sony camera sensor, found on the Google’s Pixel smartphones. 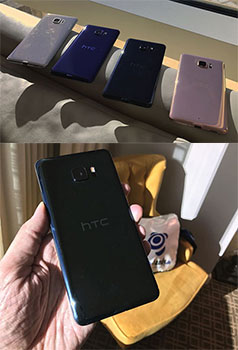 Meanwhile, separate leaks have revealed some specifications of the HTC U Play and the HTC U Ultra. The HTC U Play is tipped to sport a 5.2-inch Full HD (1920 x 1080 pixels) display, a MediaTek Helio P10 SoC, clubbed with 3GB of RAM and 32GB of inbuilt storage, 16MP cameras on front and rear, a 2500mAh battery, a fingerprint sensor on the front and no 3.5mm audio jack.

On the other hand, the HTC U Ultra is said to sport a 6-inch QHD (1440 x 2560 pixel) display, and to be powered by the newly launched 10nm based Snapdragon 835 SoC, coupled with 4GB of RAM and 64GB of inbuilt storage. It is expected to sport a dual-rear camera setup with 24MP and 13MP sensors. The front camera is said to be a 16MP shooter, a 4000mAh battery and a rear fingerprint sensor. However, the leaked specifications of HTC U Ultra doesn’t match with the leaked images, as the back panel doesn’t seem to house dual rear cameras and a fingerprint sensor. So, possibly it could be another phone altogether. 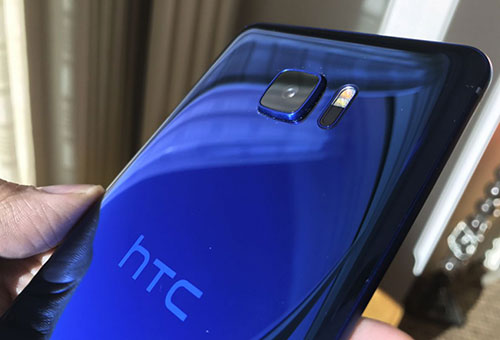 As, there is no official word from the company about these smartphones yet, you are advised to take this report with a pinch of salt. We should know everything in details at the launch event tomorrow. Stay tuned for more updates!