Few days ago, Lenovo teased the launch of its next smartphone in the P series, dubbed as the ‘Lenovo P2’ in India. Now, the company has announced that the smartphone will launch in the country exclusively on Flipkart on 11th January, 12:30pm onwards.

The Lenovo P2 flaunts a 5.5-inch Full HD (1920 x 1080 pixels) AMOLED display and is powered by a 2GHz Octa-core Snapdragon 625 SoC, paired with Adreno 506 GPU. It might come in 3GB/ 4GB RAM variants with 32GB/ 64GB internal storage options respectively. The memory is expandable up to 128GB via a microSD card.

The smartphone sports a 13-megapixel rear camera with dual-tone LED flash and a 5-megapixel front-facing camera. It runs on Android 6.0.1 Marshmallow and the fingerprint sensor is mounted on the front. 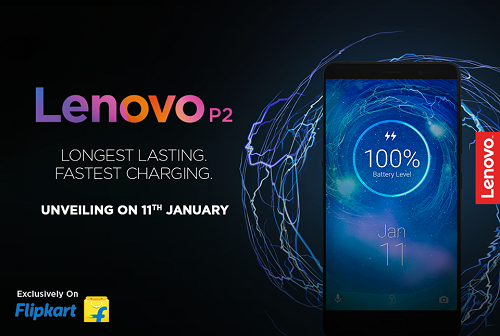 The Lenovo P2 comes in Champagne Gold and Graphite Grey colour variants. However, the pricing of the smartphone will be known at the launch event only. Stay tuned for more updates!