Lenovo launched the Vibe P1 at the last year’s IFA event and looks like the company is all set to launch its successor at IFA 2016, as the upcoming Lenovo smartphone has been spotted on Geekbench.

According to the listing, the Lenovo P2c72, which could be called as Lenovo Vibe P2 will sport a 2GHz octa-core Snapdragon 625 (MSM8953) processor with 4GB of RAM. It will run Android 6.0.1 Marshmallow out-of-the-box. It scored 922 points in the Geekbench single-core test and 4896 points in the multi-core test. Unfortunately, there are no other details revealed in the listing. 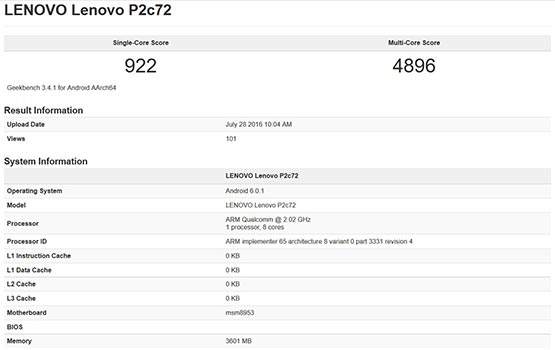 Hopefully, we will get to know more details about the smartphone in coming days.