Lenovo has officially launched the Lenovo Yoga 900 and Yoga Tab 3 Pro, at an event in Delhi, India. Last month, the Chinese manufacturer also launched Lenovo K4 Note and Vibe X3 smartphones in India. Let’s get into the details on the newly launched devices. 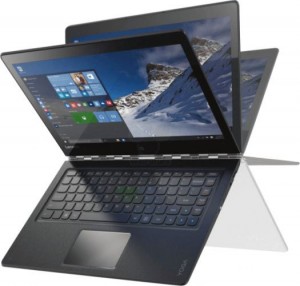 Lenovo Yoga 900 is a super-thin premium convertible laptop, that features a 13.3 inch of QHD (3200 X 1200 pixels) LED multi-touch display. Lenovo’s flagship Yoga 900 is powered by 6th-Generation Intel Core i7-6500U Processor, coupled with 16GB LPDDR3 RAM. On the storage front, it has 512 GB of SSD storage and runs on latest Windows 10 OS. It has long-lasting battery, that can play 9 hours of video playback on a single charge.

Like all the other Yoga 2-in-1’s, Yoga 900 can be placed on four modes: Laptop, Stent, Tent or Tablet. The high qualities build material can allow one to flip the screen around full 360 degrees. The laptop comes with two USB 3.0 ports, one USB Type-C port, a microSD card reader, and a 3.5mm audio jack. At 14.9mm thickness and 1.29 Kg in weight, company claims it to be the thinnest and lightest laptop. The device will be available in Champagne Gold color an is priced for Rs. 1,22,090. It can be purchased exclusively from Chroma retail stores and online at the Lenovo store. 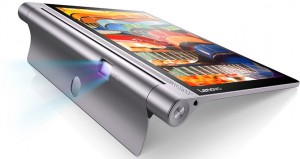 The Lenovo Yoga Tab 3 Pro was first witnessed at IFA Berlin, held in last September. The Yoga Tab 3 Pro comes with 10.1-inch Quad HD (2560 x 1600 pixels) display and is powered by Intel Atom X5-Z8500 quad-core processor, paired with 2 GB of RAM. It has 32 GB of internal storage and an expansion slot for further 128 GB via microSD card. The Yoga Tab 3 Pro runs on Vibe UI based on Android 5.1 Lollipop.

The highlight feature of Yoga Tab 3 Pro is its in-built projector, that can be rotated for 180 degree and is capable of projecting a 70 inch screen. It sports a 13 megapixel rear camera and a 5 megapixel front camera. The tablet comes with four JBL speakers with Dolby Atmos and is backed a massive 10,200 mAh battery. It is priced at Rs. 39,500 and will be available online through Flipkart and Lenovo offline stores across India.