Looks like there is no stopping to LG G5 rumors and speculations. Earlier today, LG announced the Quick cover case for its upcoming flagship, and now the smartphone has been spotted on GeekBench, a popular benchmarking website.

According to GeekBench, the model number F700 is LG G5 that will be powered by a Snapdragon 820 processor and paired with 4 GB of RAM. Another feature which gets confirmed on GeekBench is Android 6.0.1 Marshmallow OS. 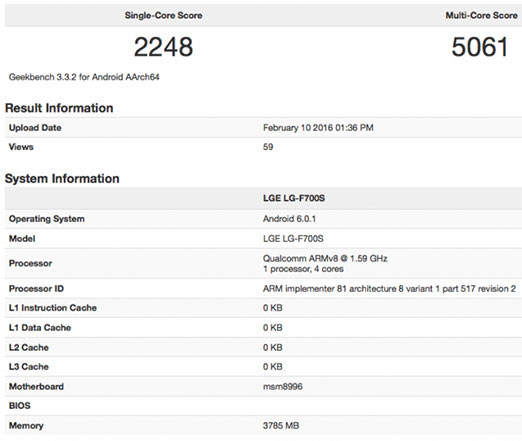 As for the rest of the specifications, rumors suggest that it may feature 5.3 inches Quad HD display, 16 MP rear and 8 MP front camera. A finger print sensor and 2800 mAh battery is also rumored. Though there is nothing more said about it, we will get all the specs confirmed on February 21st at MWC only. So till then take all these rumors with a pinch of salt.