As promised, LG has officially unveiled its flagship smartphone, LG G5 at MWC 2016 in Barcelona, Spain. The full metal body smartphone packs some interesting features along with Always on display and a hardware expansion slot.

The LG G5 flaunts a 5.3 inch (2560×1440 pixels) Quad HD ‘Always-on’ display with a pixel density of 554 ppi and a Corning Gorilla Glass 4 protection. Under the hood, it has 64-bit Snapdragon 820 quad-core processor, coupled with Adreno 530 GPU and 4 GB RAM. The G5 comes with a 32GB internal memory, that is further expandable up to 2TB with microSD card. The smartphone runs on LG Optimus UX 5.0 UI based on Android 6.0 Marshmallow.

On the camera front, it sports a dual rear camera setup, out of the two rear cameras one is an 16 megapixel shooter with laser auto focus, OIS, dual-tone flash, and 4K video recording capability. And the other one is an 8 megapixel secondary camera with 135-degree wide-angle lens. It has another 8 megapixel front facing camera. The smartphone is packed with a 2800mAh removable battery with Qualcomm Quick Charge 3.0 support. 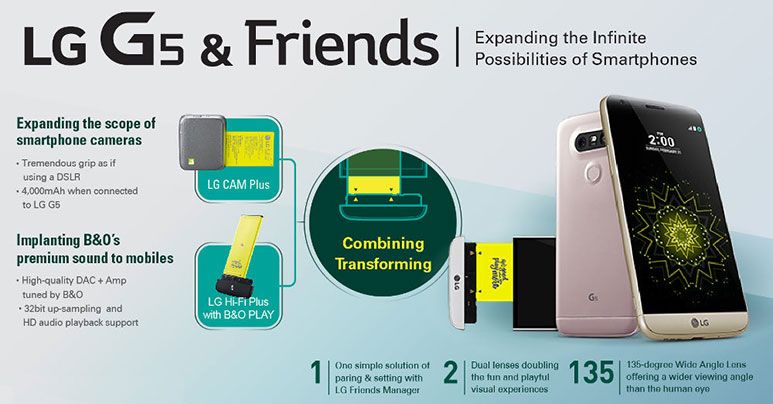 LG had already confirmed the ‘Always On’ display for G5, but the most interesting revelation (which also got leaked few days ago) for this flagship was its removable battery slot which acts as a modular slot (for hardware expansion). LG has introduced its new ‘LG Friends’ known as LG Cam Plus and LG Hi-Fi Plus with B&O play that are compatible with this modular slot. The LG Cam Plus Camera can be attached through battery slot for a comfortable grip and convenient controls of a DSLR which then offers Auto focus, exposure lock, and provides physical buttons for power, shutter, record, and zoom.

Similarly LG Hi-Fi Plus with B&O Play allows user to attach portable speakers that supports 32-bit, 384KHz high-definition audio playback. LG says, it can also be used either as a module with the LG G5, or as a separate Hi-Fi DAC when connecting to a smartphone or PC.

LG has also introduced LG 360 VR that can be connected with the G5 via a dedicated cable and works exclusively with the G5 to simulate a 130-inch TV viewed from two meters away. The company also announced LG 360 Cam and LG Rolling Bot. The 360 Cam is a compact 360-degree angle camera equipped with two 13MP 200-degree wide angle cameras, 1,200 mAh battery and 4GB internal memory, supported by a microSD card, while the Rolling Bot is device that rolls like a ball while capturing images and videos with its 8 MP camera. The LG G5 Friends Manager app, is an exclusive app for G5 that can automatically detect LG Friends and connects quickly and easily in three simple steps.

The LG G5 comes in Silver, Titan, Gold and Pink colors and will be available globally in April along with the Friends companion devices. However, there is no word on the pricing yet.

Swap out, swap in, back to ????again. Thanks, Modular Design: https://t.co/7SXfVCR7Dc pic.twitter.com/xYymjNkA5O

“The new LG G5 will encourage owners to rediscover the true joy of a mobile life. The G5 and LG Friends are the result of many experts inside LG asking themselves if it was still possible to be innovative and unique in the smartphone space. I think once customers spend a little time with the LG G5, their answer will be a resounding yes.”