The LG G6 is finally launched in India at an event in New-Delhi today. The smartphone comes with some exciting features and specifications giving a serious competition to flagship devices from other companies. The LG G6 is priced at Rs. 51,990 and will be available exclusively via Amazon.in starting 25th April in Mystic White, Astro Black, and Ice Platinum color variants.

LG shows some serious intend when it comes to the display of G6. The smartphone holds a 5.7 inches Quad HD (1440 × 2880 pixels) display with an almost bezel-less design and 80.7% screen to body ratio. There’s also the quantum Display technology and full vision display with 18:9 ratio which adds up to the give an even richer experience. The company emphasises the inclusion of Dolby Vision (and HDR 10) for enhanced videos which was only found in high-end TV’s until now.

As far as hardware specifications are concerned, the smartphone comes with a 2.3 GHz quad-core Qualcomm Snapdragon 821 processor with Adreno 530 GPU. The device comes with 4 GB RAM and 64 GB internal storage which can be further expanded up to 2TB via microSD card. The LG G6 runs on Android 7.0 Nougat with LG UX 6.0 on top.

Coming towards the imaging department, it is again impressive, coupled with new and exciting features. The LG G6 holds a Dual camera setup at the back with both the sensors having a 13 MP lens each. There’s a 5 MP selfie shooter on the front. Both the rear as well as front camera are equipped with dual wide angle lens to allow more people and a bigger background in your images. Apart from this, users can capture complete 360 degree images from the LG G6 itself, it can be later viewed with VR headsets. The LG G6 camera also comes with features namely ‘Snapshot’, ‘Matchshot’, ‘GridShot’ and ‘Guide shot’, which help in capturing images in different patterns. The smartphone supports 4K and Full HD video recording and is equipped with high AOP Mic to record clear voice in a video.

The LG G6, as per the company, has a well balanced design with only a 71.9 mm wide body which helps the users to operate the device with one hand. The LG G6 boasts an all-metal design made up of Al601 frame and the smartphone passes 14 US military standard durability tests. The smartphone comes equipped with a fingerprint sensor and IP68 rating which makes it water and dust resistant. It holds a 3,300 mAh battery which is specially designed to prevent overheating or getting damaged and also supports quick charge 3.0 where, the company claims that the smartphone gets fully charged within an hour. For connectivity, there is 4G LTE, WiFi 802.11 ac (2.4 G,Hz and 5 GHz bands), Bluetooth 4.2 LE, GPS, NFC and USB Type-C. 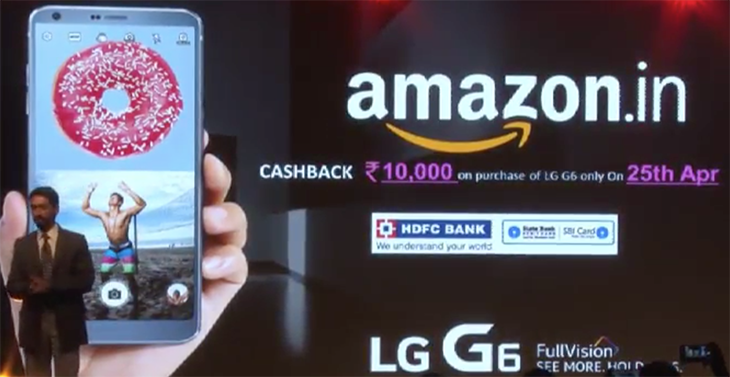 The smartphone comes with exciting launch offers apart from the earlier mentioned pre-booking offers. All HDFC bank and SBI card holders will get a Rs. 10,000 worth cashback on the purchase of the smartphone via Amazon on 25th April. Also, all the Jio customers will get 100 GB extra data till March 2018 and extra 10 GB data on recharge of Rs. 309 on the purchase of smartphone. Also, the other offers on pre-bookings such as EA Special gifts worth Rs. 14,100 for 6 games including Temple Run 2, Spider-Man Unlimited, Crossy Road etc. and LG Tone Active+ HBS A-100 headset with 50% discount remain the same.