As it was expected, LG has launched its Q6 smartphone today, which comes in as the first entry in the latest Q series of smartphones from LG. Along with LG Q6 the company also brought in the Q6+ and the Q6a which are essentially the lower and the higher variants of Q6. The smartphone is apparently the trimmed version of LG G6 and was being rumoured from quite a while.

LG hasn’t yet unveiled the pricing details of the smartphones but as far as the availability is concerned, the LG Q6, Q6+ and Q6a will hit the shelves in select Asian markets starting from August, followed by Europe, Latin America and North America. All the smartphones come in Astro Black and Ice Platinum color options, the Q6 also comes in Mystic White and Terra Gold colors, where as Q6a and Q6+ also come in Terra Gold and Marine Blue colors respectively.

As mentioned earlier, the company has come up with 3 different variants of the LG Q6 which vary depending upon the RAM and internal storage only. Rest all the specifications, features and design of smartphones remains the same. All the three smartphones sport a 5.5-inch FullVision display with FHD+ (1080 x 2160 pixels) resolution, 18:9 aspect ratio and almost bezel-less design. 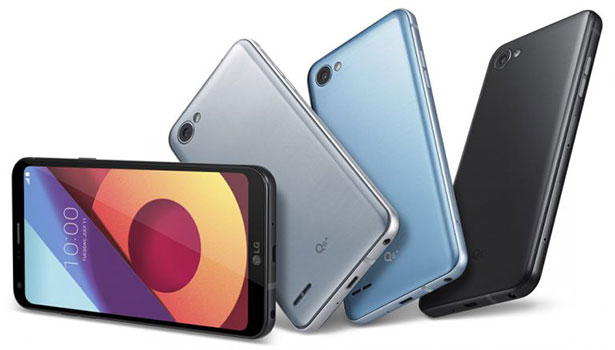 Coming down to the imaging department, it consists of a 13-megapixel rear camera along with a 5-megapixel front-facing camera with 100-degree wide-angle lens. The highlight here is that the LG Q6, Q6+ and Q6a come with the same exciting camera features that are present in G6, for example, Square Camera Mode, GIF mode, Food mode etc. The smartphones are made of ultra-strong 7000 series aluminium frame and hold a uni-body metal design. However, the back appears to be made up of plastic and there is no fingerprint sensor as well.