Finally all the rumors and speculations have come to an end as Motorola has launched the 3rd Generation of Moto G today in an event in Delhi, India. The new Moto G comes in two variant i.e. 8 GB internal storage with 1 GB RAM and 16 GB internal storage with 2 GB RAM for Rs 11,999 and Rs 12,999 respectively and like all the other Motorola products, it will be available exclusively on Flipkart from today mid-night.

The Moto G (3rd Gen) sports a 5-inch HD (1280×720 pixels) IPS display with Corning Gorilla Glass 3 protection. The smartphone is powered by 1.4 GHz quad-core Qualcomm Snapdragon 410 processor with Adreno 306 GPU. It also has microSD slot for memory expansion up to 32 GB. It runs on latest Android Lollipop 5.1.1 and the best part of all, it will continue to get the latest Android updates before most of the flagship phones. 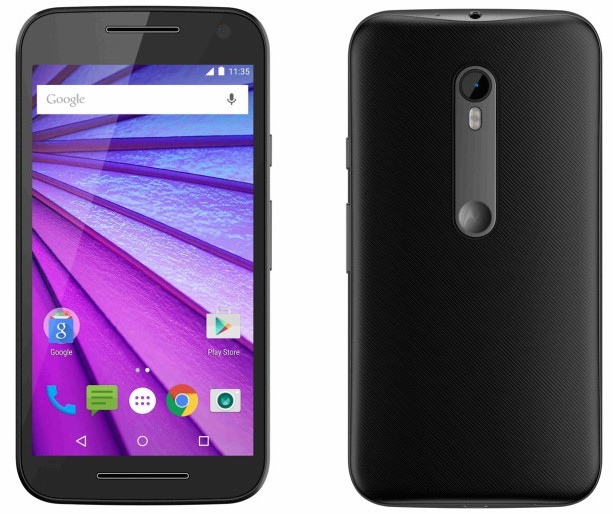 The Dual sim phone (GSM + LTE) has lots of much-needed improvements in the camera department. It sports a 13 megapixel rear camera with f/2.0 aperture & dual LED flash. It is also capable of Full HD (1920 x 1080) video recording. It also houses a 5 megapixel front camera with wider angle so you can fit maximum number of people into your selfie. Motorola said in the launch event that the 13 MP rear camera is the one that’s used in the Nexus 6!

Another important feature is that the new smartphone is IPX7 certified water-resistant which means it can prevent the phone for 30 minutes in 3 feet deep water. It also has some other new features like Moto Display, Quick capture (shake for camera) and Chop twice (shake twice for LED flash).

The Moto G (3rd Gen) comes in two colors variants Black and White, but you can also replace the back cover with Moto shell available in 7 different colors of rainbow.

The new Moto G still doesn’t boast of great specifications like the Zenfone 2 or the Mi4, but it is a master piece when it comes to delivering a great user experience. The sale for the smartphone will start today mid-night on Flipkart.