The leaks regarding upcoming Motorola smartphones are surfing up perpetually since the last few weeks. Recently, information regarding the entire line-up of upcoming Moto phones was leaked which listed different smartphones that the company is planning to launch this year. After the most recent leaks of Moto E4 and E4 Plus along with Moto Z2 Play and Z2 Force, it is now time for another set of smartphones from the list, the Moto G5S and Moto G5S Plus.

The upcoming smartphones Moto G5S and Moto G5S Plus are up with a leak of their presentation slide which reveals the overall design of the smartphones. As per the leaked renders, the smartphone can be seen in Grey, Gold, and Blue color options. The front of the smartphone resembles to that of the Moto G5, holding a fingerprint scanner embedded below the display. There also appears a small Moto logo squeezed in between the ear-piece and top of the screen. 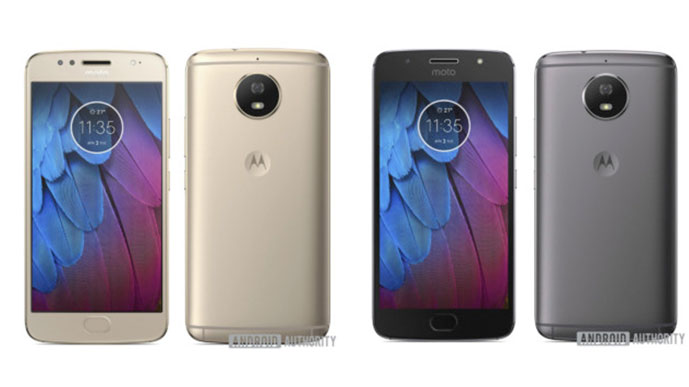 Going further, the rear of the G5S also has a design similar to the standard Moto G5 line-up. The smartphone has the same round shaped camera bump which includes the lens and LED flash along with the circular depressing in the centre containing the Motorola dimple. The smartphone appears to bear a full-metal design, unlike the aluminium back plate and plastic sides found on the Moto G5 and G5 Plus. There are two antenna lines passing through the top and bottom of the Moto G5S which are noticeably thin this time as a result of an all-metal body.