Well, Motorola had a busy 2017 where it launched many smartphones to woo the consumers. Not only did the company received an appraisal for the quality of their smartphones, but they also garnered rave reviews for the new set of Moto Mods they introduced in the market. Even in the beginning of 2018, there was a big leak regarding the new set of smartphones which the company might introduce, during the course of the current year.

The leaks and rumours which have surfaced on the internet from time to time, have kept the users both interested and curious about the future developments from the company. Now new leaks reveal more details about the most awaited smartphones from the company – the Moto G6 and Moto G6 Play and hint that the launch event is near. 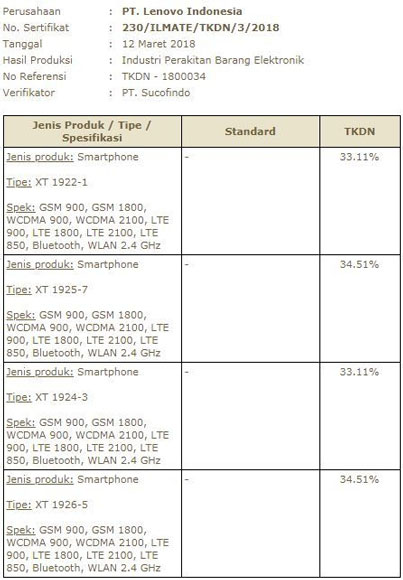 Talking about the smartphones themselves, the Moto G6 with model number XT1925-7, Moto G6 Plus with model numbers XT1926-5 and XT1922-1 have been spotted on the internet for TKDN and NBTC certification in Indonesia and Thailand. Not much was revealed about the smartphones and their specifications per say, but facts combined with rumours are strong enough to suggest, that the devices will be equipped with a 5.93-inch FHD+ (2160×1440) display and for power consumption will be reliant upon a 3,250 mAh battery.

More words on the matter, strongly suggest, that the Moto G6 will be powered by a Snapdragon 430 SoC, while the G6 Plus will be powered by a much more sophisticated Snapdragon 630 SoC. Rumours also suggest that the G6 plus will be available in two variants, depending on memory capacities of 4 GB RAM and 6 GB RAM and will be available to consumers in Gold, White, Blue, Silver and Cyan colours. Apart from these smartphones, others devices like Moto E5 and E5 Play were also spotted at the certification bench.