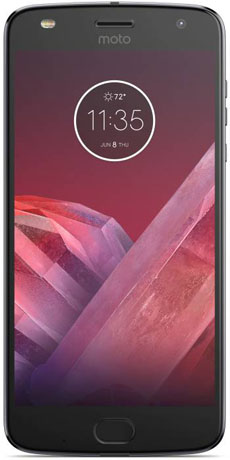 Buy from Flipkart »
Availability Details:
Available both in online and offline stores.
OS Updates?
Will get future Android updates for sure

Overall, the Moto Z2 Play is very well designed slim phone with excellent cameras, great display, good performance, good battery life and great stock Android software. It is an all round phone with good balance of everything. And when you add the Moto Mods to it, the experience goes to a whole different level with great capabilities added to your smartphone. Even if you give the expensive Moto Mods a miss, it is still a very good smartphone.

Motorola has launched an upgraded variant of its popular modular smartphone Moto Z Play, as the new Moto Z2 Play. It supports all the new and existing Moto Mods but, let’s come to it later and start with the design first. The Moto Z2 Play comes with an almost similar design like the Moto Z Play but, it is much thinner at just 5.99 mm and also comes with a premium metallic back this time. It looks beautiful with antenna lines surrounding all the edges of the back and the big circular camera unit, although it has big hump. It is really thin and scores very good in the design department.

It sports a 5.5. inches Full HD Super AMOLED display which has excellent colors, good brightness and a very good overall quality. The Moto Z2 Play is powered by the 2.2 GHz octa core Snapdragon 626 processor paired with 4 GB RAM and Adreno 506 GPU. At this price, one expects a powerful processor from Qualcomm’s ‘Snapdragon 800’ series but even with the Snapdragon 626 the performance is very good. It can handle multitasking and gaming very well and doesn’t heat up as well. It packs a 12 MP rear camera with Dual Autofocus Pixel, ƒ/1.7 aperture, Laser Autofocus a full Pro Mode, Auto Night mode and dual-LED flash.

The picture quality is very good and significantly improved over the Moto Z Play. It can record 4K videos at 30 fps. The Moto Z2 Play packs a 5 MP front camera with ƒ/2.2 aperture Wide-Angle lens, beautification modes and a dual-LED flash as well. It clicks good selfies and due to the flash, low light selfies also turn out very good. It runs on the latest Android 7.1.1 Nougat with Stock Android UI, which comes with few Motorola enhancements like the Moto Display (shows time and notification icon when screen is lock), Moto Voice (a voice assistant, which when asked, for example, “show me the weather”, quickly shows the weather app), Moto Actions (helpful actions like twist the phone to open camera, chop twice to turn on flashlight, etc.).

It packs a very fast and responsive fingerprint scanner which, apart from unlocking the phone, also locks the phone when long tapped. It is a dual sim phone with 4G and VoLTE support and packs in 64 GB of onboard storage which is expandable via microSD card through a dedicated slot. It comes with Water repellent nano-coating which helps you with occasional splashes. The Moto Z2 Play is backed by a non-removable Li-Ion 3000 mAh battery which delivers good battery backup and supports Motorola’s TurboPower fast charging. Now, coming to its most important feature, the Moto Mods, to explain in details, Moto Mods are the swappable back covers which attach to the phone via strong magnets and can be interchanged very easily.

There are various Moto Mods like the Insta-Share Projector Mod which converts your phone into a mini projector and can prove very handy for small presentations and meetings, the new JBL SoundBoost 2 Mod which adds loud rich quality stereo sound to your phone, it also comes with kickstand so pull it and there is no need to carry any other portable speaker for music, the Hasselblad True Zoom Mod, which converts your phone into a true digital camera with 10x optical zoom, xenon flash, physical shutter and zoom buttons and grip like standard cameras, the Incipio offGRID™ Power Pack Mod which is a powerbank mod and adds extra battery life to the phone and also the Moto Style Shells which give different styles and looks to the phone. The Moto Mods are obviously great additions to the phone, but they come at a price which is very big!