Lenovo’s Moto Z2 Play smartphone has regularly been making rounds in the rumour mill. Recently the smartphone was reported having received TENNA certification. Also, prior to that some leaked images of Moto Z2 Play came up giving an idea about the design of the smartphone. Now the smartphone is again spotted online and this time giving away all the details about the specifications.

The Moto Z2 Play has been spotted on popular benchmarking site, GFXBench with the entire list of specifications. There have been a few rumours here and there regarding the specs of the smartphone, but this time things get more tangible as the results match to the listings spotted on TENNA previously. 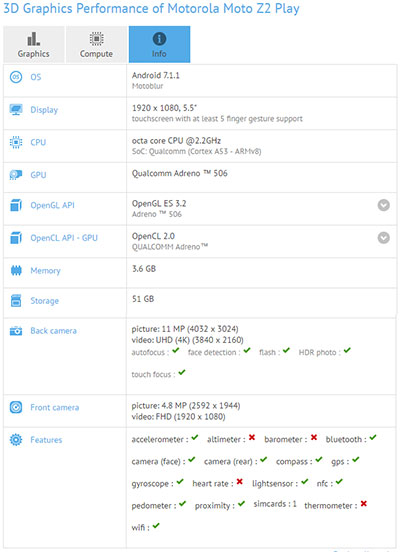 As per GFXbench, Moto Z2 Play will sport a 5.5-inch full-HD (1080×1920 pixels) display and will have a 2.2 GHz octa-core Qualcomm Snapdragon 626 processor under the hood coupled with Adreno 506 GPU. The smartphone is speculated to come with 4 GB RAM and 64 GB internal storage. The device will be running on Android 7.1.1 Nougat.

In the imaging department, the Moto Z2 Play is listed to hold a 12 MP rear camera which is less as compared to the 16 MP rear camera of its predecessor. Moto Z2 Play will also come with 4K video recording support. On the front, it will have the same 5 MP camera.

If we were to compare the Moto Z2 Play with its predecessor, Moto Z Play, which was launched last year, it has a Snapdragon 625 chipset along with 3 GB RAM and 32 GB internal storage. The camera department includes a 16 MP rear camera and a 5 MP front camera as mentioned earlier. The highlight of the smartphone was its massive 3,510 mAh battery which could survive well over a day with heavy usage.

There is no news as of now regarding the launch date of the smartphone, but considering the frequent leaks as well as the TENNA certification we can expect it to be unveiled soon.