The flow of rumours regarding the upcoming Motorola smartphone doesn’t seem to be stopping at all. It is almost everyday that something or the other comes up giving information about the smartphones. After being rumoured to launch anytime in coming days, the Moto Z2 is again spotted on benchmarking portal GFXbench. Previous to the this, the smartphone was also found listed on Geekbench falling in-line with the listings on GFXbench.

Going by the specifications listed on GFXbench, the Moto Z2 seems to be sporting a 5.5-inch QHD (2560 x 1440 pixel) display and will be powered by an Octa Core Snapdragon 835 processor clocked at 2.4 GHz. The smartphone, as per the listing will come with 4 GB RAM and 64 GB internal storage which will most probably be expandable via microSD card. Moto Z2 appears to be running on Android 7.1 Nougat. 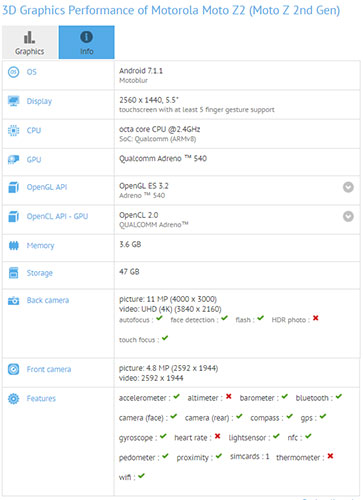 Coming towards the imaging department, we already know that the smartphone will be coming with a dual rear camera setup. However the listing here shows a 12 MP sensor so we can assume it be the resolution for any one out of the two sensor. The smartphone also appears to be coming with a 5 MP front camera which remains the same as that of its predecessor.

The Moto Z2, prior to this, was speculated to be unveiled on 27 June but clearly nothing like that happened. The smartphone is now expected to be lunched on 30th June i.e tomorrow which is also the rumoured launch date for the Moto X4 smartphone. Looking at the heap of new arrivals from Motorola it is still uncertain when the Moto Z2 will be unveiled but considering the buzz it is surely going to be sometime soon.