As expected, Motorola has launched a new smartphone, dubbed as Moto Z Play at IFA 2016 in Berlin, Germany. The modular smartphone is priced at $499 (approx. Rs. 33,500) and will start rolling out later this month.

The Moto Z Play flaunts a 5.5-inch Full HD (1920 x 1080 pixels) Super AMOLED display with pixel density at 403 ppi and Corning Gorilla Glass protection. Under the hood, it has an Octa-Core Snapdragon 625 processor, clocked at 2GHz, coupled with Adreno 506 GPU and 3GB RAM. It will be offered in 32GB / 64GB internal storage variant, which is further expandable up to 2TB with microSD. The smartphone runs on Android 6.0.1 Marshmallow.

On the Photography front, the Moto Z Play sports a 16-megapixel rear camera with dual-tone LED flash, Laser Autofocus, PDAF, 1.3um pixel, and f/2.0 aperture. It also has a 5-megapixel front-facing camera with wide-angle lens and LED flash. The smartphone is backed by a 3510mAh battery with Turbo-charging feature and also includes a fingerprint sensor embedded into the physical home button.

Like every other Moto Z smartphone, it will be compatible with Moto Mods accessories such as JBL SoundBoost, the Moto Insta-Share Projector (to deliver a 70-inch projector experience), and the Power Pack (to provide up to 22 hours of additional battery life). Motorola also introduced its latest Moto Mod today known as Hasselblad True Zoom, which is a camera attachment that includes features like a 10x optical zoom, Xenon flash, OIS for stills and EIS for video, and a physical shutter button. 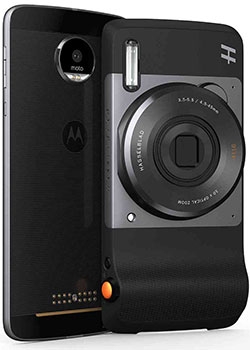