After appearing in several leaks and rumors, Motorola has finally launched its much-anticipated smartphones, Moto G4 and Moto G4 Plus at an event in New Delhi. Both the smartphones will be offered in Black and White color variants.

The Moto G4 and Moto G4 Plus are almost similar, except the rear camera and fingerprint sensor. The Moto G4 Plus has a fingerprint sensor integrated into a physical home button, which is absent on the Moto G4. It unlocks the phone in less than 750 milliseconds. The G4 plus also has a 16-megapixel Omnivision PureCel Plus rear sensor with f/2.0 aperture, 1.3um pixel size, PDAF (Phase Detection Autofocus) and Laser Autofocus. On the other hand, the Moto G4 has a 13-megapixel rear camera with f/2.2 aperture and LED flash. 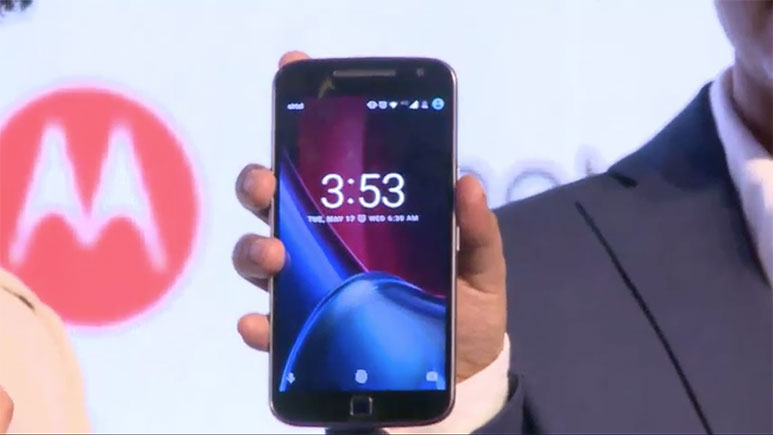 Both the Moto G4 and G4 Plus flaunts a 5.5-inch Full HD (1920 X 1080 pixels) display with pixel density of 401 ppi and Corning Gorilla Glass 3 protection. They both are powered by an octa-core Qualcomm’s Snapdragon 617 processor clocked at 1.5 GHz, coupled with Adreno 405 GPU. Both the dual Sim smartphones have expandable storage up to 128 GB and they both run on Android 6.0 Marshmallow out-of-the-box.

The Moto G4 and Moto G4 Plus feature a 5-megapixel selfie camera with OmniVision OV5693 sensor and 84-degree wide-angle lens. They both are backed by a 3000mAh battery with Turbo power charger that can give 6 hours of usage with 15 minutes of charging. Connectivity options include 4G LTE with VoLTE, WiFi 802.11 b/g/n, Bluetooth 4.1, and GPS on both these smartphones.