Based on our Scores
Based on Specs & Facts

Both the Motorola One Vision and Samsung Galaxy M40 are excellent smartphones and though the Galaxy M40 gets one point more in our scoring, there is no clear winner here and you will have to choose the one which suits your needs more. The major decision-making factors in choosing between the two phones are Design, Display, Performance, User Interface, Software updates, Selfies & Headphone jack (Galaxy M40 lacks the headphone jack) as both the phones do most of the other things very similarly.

Let’s start exploring in details starting with the design. Both the phones come with a hole punch design for the front camera but, the Samsung Galaxy M40 does it a lot better as it has a very small and less obstructive hole while the Motorola One Vision has a big thick border around the front camera hole. Not only that the Galaxy M40 has slimmer bezels around the display and it looks more beautiful from the front. However, the Motorola One Vision has a better build quality with a glass back and with its beautiful colors, it also looks more beautiful from the back.

Next, when it comes to the performance, the Galaxy M40 is the clear winner with a much powerful Snapdragon 675 processor with 6 GB RAM compared to Samsung’s own Exynos 9609 with 4 GB RAM in the Motorola One Vision. Coming to the software part, the Motorola One Vision comes under Android One project with promised updates to the next two Android versions & monthly security updates while also offering a clean stock user interface with added goodies in the form of Moto Actions. On the other hand, the Galaxy M40 runs on Samsung’s new One UI, which we also rate very highly and is also a lot more customisable but Samsung is usually very slow with the updates. So, both the phones offer good UI and its your preference between Stock Android & One UI but if you are more concerned with updates, go with Motorola One Vision.

So, as you can see both the phones are better in some or the other department, and you should choose based on your priorities. 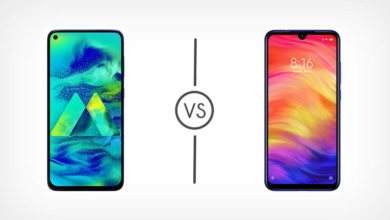 Samsung Galaxy M40 VS Redmi Note 7 Pro: Samsung’s resurgence vs the budget king, which one to buy?