If you are picking up your Moto X4 to check whether the same update is available to you or not, then before you do that, you should know, not all Moto users will get the update at the same time. The recent roll-out of the new update can be called as a means to confirm the stability of the new operating system. Which is why once the select few have tried out the new software, it’ll be made available to a wider audience. But for the time being, it looks like only users of Moto X4 having a build number of OPW.27 will receive the new Android ‘O’ update, along with the other necessary December updates. 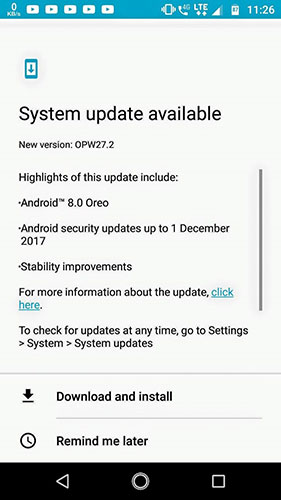 The Android 8.0 Oreo update is a heavy one and has a package size of 1138.6 MB. The eligible Moto X4 users will get an update prompt on their phone, where there the update can be downloaded and installed. In order to check, whether the new updates are installed or not, you shall go to your phone’s Settings, in About Device, under ‘Android Version’ if it says “8.0.0” then congrats, the Android Oreo update is now successfully running on your device.

The latest updates to Android Oreo has been a topic of discussion since its announcement somewhere back in the month of May 2017, and with new phones with updated hardware have already been launched, it was about time, a new software accompanied those specs. If you are curious about what to expect from Android ‘O’, then you would be glad to know, the new software packs within itself new features that make your phone’s function a lot crispier. Along with the performance of your phone, it also comes with new features like Auto-fill, Notification Dots, Picture-in-Picture, Background limits to improve battery lifespan, Notification channels, Snooze notifications, Adaptive icons, Wide-gamut color for apps, Support for high-quality Bluetooth audio codecs, Font resources in XML among other features.

To remind, the Moto X4 packs up within itself a 5.2 inches Full-HD (1080 x 1920 pixels) display with 424 PPI. The capacitive multi-touch screen is protected by Corning Gorilla Glass 3 and has screen-to-body ratio of 68.4%. The Moto X4, that runs on Stock Android UI and Adreno 508 GPU, is powered by 2.2 GHz Octa-core Snapdragon 630 processor and comes in two variants, with 3 GB/32 GB and 4 GB/64 GB memory configuration. It is equipped with a dual camera set up on the rear with 12 MP + 8 MP sensors and has a front camera of 16 MP with LED flash. The phone runs on a 3,000 mAh Li-on Battery and is available in Super Black and Sterling Blue colors.