Motorola, owned by Lenovo, has finally announced its fairly rumoured Moto C and Moto C Plus smartphones. The Moto C series was speculated to offer the cheapest smartphones from Motorola ever, and that’s exactly what appears from the pricing. The smartphones will be available starting this spring across Latin America, Europe, and the Asia-Pacific at a base price of €89, or $97 which roughly translates to Rs. 6,200.

Let’s take a look at the phones one by one.

In the imaging department, there is a 5 MP rear camera with LED flash and 720p video recording support. There is also a 2 MP front facing camera again with LED flash. The Moto C packs a 2,350 mAh battery and measures 145.5 x 73.6 x 9 mm with 154 grams. The smartphone is available in Metallic Cherry, Pearl White, Fine Gold, and Starry Black colour variants.

Moto C Plus bears a similar design as that of the Moto C but comes with more advanced features. The smartphone sports a 5 inch HD (720 x 1280 pixels) display and has a 1.3 GHz MediaTek MT6737 quad-core processor under the hood. The device comes with 1 GB RAM and 16 GB internal storage which is expandable via microSD card. The Moto C Plus also runs on Android 7.0 Nougat similar to that of Moto C. 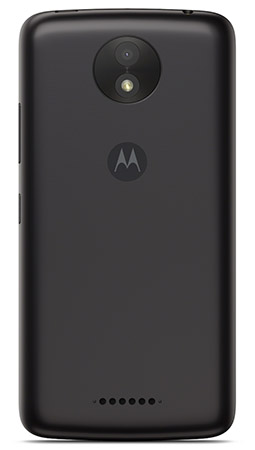 The smartphone holds an 8 MP rear camera f/2.2 aperture and a 2 MP front camera, where both front and rear cameras are coupled with LED flash. The device packs a massive 4,000 mAh battery which is also the highlight of the smartphone. The Moto C Plus is priced at EUR 119 which roughly translates to Rs. 8300.

Although there is no confirmation about the availability of Moto C and Moto C Plus smartphones in India but we can expect it to hit the India shelves by the month of June considering Motorola’s previous record.