As we already know HTC is working on the two Nexus devices this year, currently codenamed as Marlin and Sailfish. However, Nexus Sailfish was recently spotted on GFXBench, revealing its specifications.

According to the listing, the Nexus Sailfish could sport a 5-inch Full HD display and will be powered by a Snapdragon 820 processor, paired with 4GB RAM and 32GB storage. It could also feature a 12 MP rear camera and 8MP front camera. It is expected to run on Android 7.0 Nougat. 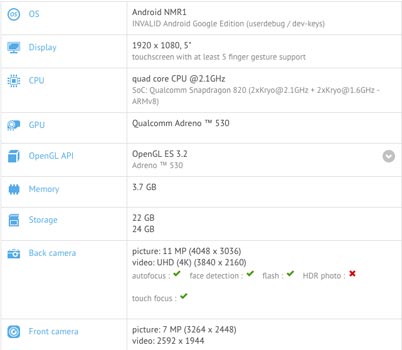 Some rumors also suggest that the smartphone would pack a 2770mAh battery and will support USB Type-C port.

Google is expected to announce the HTC made Sailfish and Marlin smartphones by the end of September.