For all the Nokia fans, who were eagerly waiting for the Android powered Nokia smartphone, this news may be a disappointing one for them. The mysterious Nokia D1C, believed to be the company’s first smartphone after selling its mobile business to Microsoft, might not actually be a smartphone. Nokia D1C was earlier spotted on AnTuTu and Geekbench sites where, interestingly the screen size was not mentioned.

Now, according to the latest listing on benchmark site GFX Bench, the screen size is mentioned as 13.8-inch, which clearly rules out the possibility of a smartphone. The large 13.8-inch display features Full HD (1920 x 1080 pixels) resolution. The device will be powered by 1.4 GHz Octa-core Qualcomm chipset coupled with 3 GB of RAM. 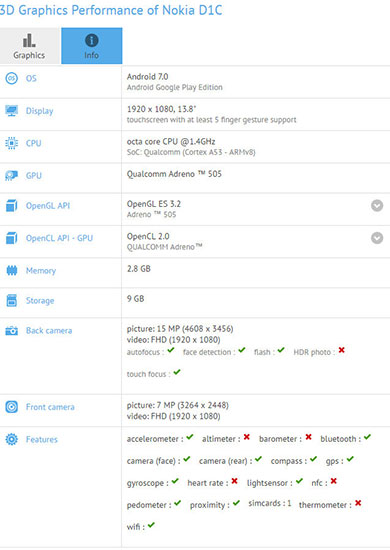 On the camera front, the tablet has been tipped to pack a 16-megapixel rear camera and an 8-megapixel front-facing camera. The inbuilt storage is expected to be 16 GB. The listing also tips that the tablet will run on Android 7.0 Nougat.

If this reports turn out to be true, then the Nokia D1C will be the second Android tablet under Nokia branding. Nokia N1 was the first tablet launched in 2014. For those who don’t know, Nokia has signed an exclusive 10-year licensing deal with Finland-based HMD Global Oy to produce and sell Nokia-branded Android phones and tablets.

It will be interesting to see, if Nokia launches any Android smartphone by the end of the year or not. Stay tuned for more updates!