As we all know, Nokia is all set to make a comeback in the smartphones market next year at MWC 2017 in Barcelona. Meanwhile, many devices keep popping up in various leaks and rumours. The latest device to join the league is an entry-level smartphone with code-name Pixel, that has been spotted on benchmarking site GeekBench.

According to the listing, the phone will run on Android 7.0.1 Nougat and will be powered by a dual-core Qualcomm Snapdragon 200 processor clocked at 1.19GHz coupled with Adreno 302 GPU. The basic processor will be paired by 1GB of RAM.

The Nokia Pixel smartphone scored 404 on the single-core test and 661 on the multi-core test, which shows that it is an entry-level smartphone. The phone will also be equipped with Quick Charge 3.0 technology. 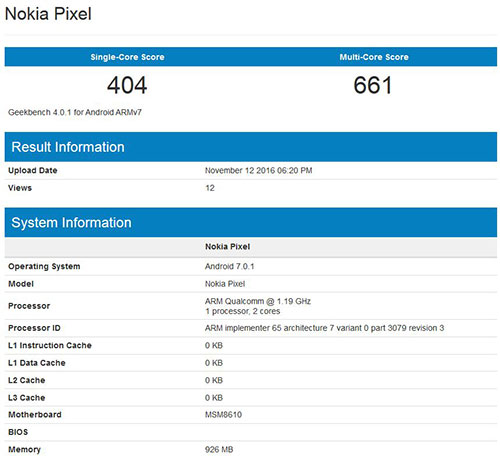 Earlier, a budget phone named Nokia D1C passed through Geekbench and then got leaked in render images few days ago. The Nokia D1C smartphone has a single-core score of 682 and multi-core test of 3229 and it is expected to pack a 5.5-inch Full HD display, Snapdragon 430 processor, 3GB RAM with Android 7.0 Nougat.

All the new Nokia-branded smartphones and tablets are going to be designed and developed by Finnish company HMD Global, while Foxconn will be taking care of the manufacturing duties.