The upcoming flagship phone from OnePlus has been spotted on AnTuTu benchmarking site. According to Gizmo China, the OnePlus 3 was found listed on AnTuTu with model number of A3000.

As per the listing, OnePlus 3 may feature a 1080p display, a Snapdragon 820 SoC with Adreno 530 GPU and 4GB RAM, and Android 6.0.1 Marshmallow. It also sports a 16-megapixel rear camera with dual-tone LED flash and has an 8 megapixel front-facing camera on board along with the fingerprint scanner. No details about the screen size or battery capacity has been revealed yet. 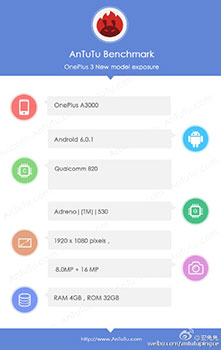 The OnePlus 3 was first rumored to get launched on April 7, however in a statement to Android Authority, OnePlus has confirmed that “the April 7 event is focused on the China market. We will not be launching our next device then”.

Also, the OnePlus co-founder Carl Pei has earlier said that the upcoming flagship will feature a ‘new design,’ and will launch by the end of Q2 2016.

The company has recently announced the permanent price cut on both the variants of OnePlus 2.