Oppo has launched a new Black BCCI Edition of its recently unveiled Oppo F3 smartphone. The device is being launched in black color with a BCCI logo engraved on the back. The smartphone is priced at Rs. 19,990 and will be sold from 4th June exclusively via Flipkart. However to increase the excitement, Oppo will be conducting an auction of the phone on Flipkart a day before the India vs. Pakistan match which is on June 3.

The Oppo F3 smartphone was launched earlier this month and came in as a camera centric smartphone. To recall, the smartphone sports a 5.5 inch Full HD (1920 x 1080 pixel) display and is powered by a 1.5 GHz Octa core MediaTek MT6750T processor along with Mali T860 GPU. The smartphone will come with 4 GB RAM and 64 GB inbuilt memory which is expandable via microSD card. The device runs on Android 6.0 Marshmallow with ColorOS 3.0 on top.

Coming towards the cameras, which are the highlight, Oppo F3 bears a 13 MP rear camera with flash and features like auto-focus, touch focus, face detection and HDR. There is a Dual camera setup at the front with 16 MP and 8 MP sensors each, similar to its bigger variant Oppo F3 Plus.

Will Yang, Brand Director, OPPO India, in a statement, said:

“The colour ‘black’ is synonymous with style and suave. With a stylish edge to the new OPPO F3, we aim to give consumers a chance to make a style statement.”

The connectivity options of the smartphone include 4G VoLTE, WiFi, Bluetooth and GPS. Oppo F3 packs a 3,200 mAh battery without quick charging support. There is a fingerprint sensor embedded in the physical home button along with other on board sensors which include Accelerometer, Altimeter, Proximity sensor, Compass and a light sensor. 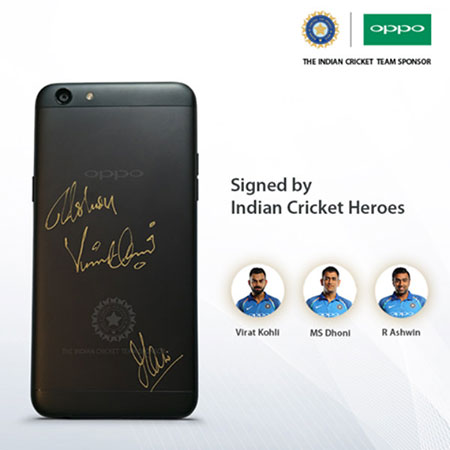 The smartphone is launched as a support to the India cricket team in the upcoming Champions Trophy. This could essentially be a branding strategy to draw more attention towards the smartphone which could prove to be helpful as cricket is a big deal in India. More over the rear of the smartphone appears to be engraved with signatures of widely famous cricket players such as MS Dhoni and Virat Kohli which could also prove to be one of the selling points.