Oppo has recently announced that it will launch its upcoming smartphone Oppo F3 on May 4th, however, prior to that there was no information, leak or rumour regarding the smartphone. But with just few more days to go for the launch, the smartphone has been spotted on popular benchmarking portals GFXbench and Geekbench revealing the list of specifications.

As per the listings, the Oppo F3 sports a 5.5 inch Full HD (1920 x 1080 pixel) display and is powered by a 1.5 GHz Octa core MediaTek MT6750T processor along with Mali T860 GPU.  The smartphone will come with 4 GB RAM and 64 GB inbuilt memory which will most probably be expandable via microSD card. The device appears to be running on Android 6.0 Marshmallow. 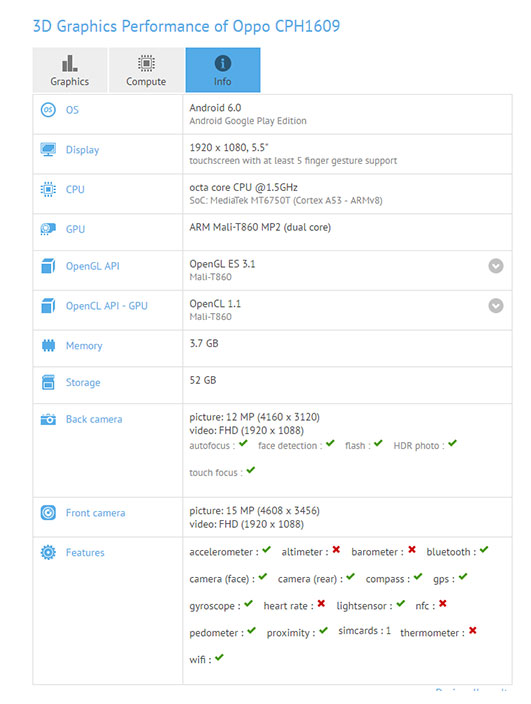 Coming towards the cameras, the listing shows that the Oppo F3 will bear a 13 MP rear camera with flash and features like auto-focus, touch focus, face detection and HDR. The listing also shows a 16 MP front camera, although it does not mention a dual camera set up at the front but it is expected that the smartphone will bear a dual front camera set up with 16 MP primary and 8 MP secondary camera similar to its bigger version Oppo F3 Plus, living up to the ‘selfie expert’ promo tag.

The connectivity options of the smartphone include 4G VoLTE, WiFi , Bluetooth and GPS. There is no mention of the battery but it could pack one between 3,200 mAh to 3,500 mAh considering a 4,000 mAh battery in the Oppo F3 Max. The sensors on board include Accelerometer, Altimeter, Proximity sensor, Compass and a light sensor. A fingerprint sensor doesn’t appear in the listing but it is likely to be there.

We obviously will have to wait till the launch to know the exact price, however we expect it to be below Rs. 20,000 considering other smartphones from Oppo. The launch is scheduled on 4th May where all the details and additional offers will be unveiled.