Oppo R11 has been spotted on the bench marking portal AnTuTu, revealing some of its key specifications. ‘R11’ is an upcoming smartphone from Oppo which is expected to be launched around June in China, followed by its Global release thereafter. The smartphone is also apparently seen in various bill board ads in China which indicated that its launch is not far away. 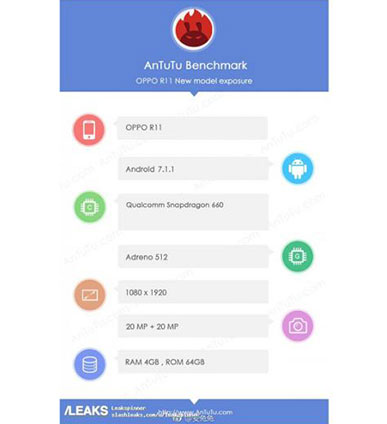 As spotted on the bill board ads in China, the Oppo R11 is speculated to hold a 20 MP  camera on both, front as well as rear of the smartphone. Also the AnTuTu listing shows that the smartphone will come with a dual camera setup where both the sensors will be of 20 MP each. The additional details that AnTuTu listing reveals is that the smartphone will contain a Snapdragon 660 processor under the hood along with an Adreno 512 GPU. Oppo R11 will come with 4 GB RAM and 64 GB internal storage as listed on the site. The device will sport a Full-HD (1080 x 1920) display and is said to be running on Android 7.1.1 Nougat.

This not the first time when leaks of Oppo R11 have surfed up. A leaked image of the smartphone came up previously which showed the dual camera setup on the rear. Followed by this there was another leak of few real life images which also indicated the same. Going by the previous speculations, the Oppo R11 is expected to bear a 5.5 inch Full HD display and is powered by a 2.2 GHz Octa-core Qualcomm Snapdragon processor. The remaining details on the AnTuTu listing also resemble to the previous leaks.