Just like other tech giants, Samsung has also announced slew of products at the ongoing CES 2017. The product portfolio includes Chromebook Pro, Chromebook Plus and the company’s first ever gaming laptop, dubbed as ‘Samsung Notebook Odyssey.’

The new Samsung Chromebook Pro and Chromebook Plus are lightweight and sport an all-metal design, giving them a premium look. These are the first from the company to support a Stylus and allow inking in screen. Both the devices sport a 360-degree hinge for switching it into tablet mode, tent mode, or stand mode.

The Stylus is ready to use out of the box with pre-installed Google Keep for notetaking and Samsung ArtCanvas for drawing. The newly developed stylus has a 0.7mm pen tip and pressure sensitivity for precise screen capturing. The stylus is tucked on the edge of the laptops, and clicks out just like on Samsung’s Note smartphones.

Both the Chromebooks sport 12.3-inch (2400×1600) LED Display (3:2 aspect ratio) with Touch Screen Panel and have 4GB of RAM and 32GB of storage. Both sport 2 USB Type-C ports, and support 4K video output, and a microSD card reader. Both the Chromebooks weigh in at 1.08kg and offer up to 8 hours of battery life. 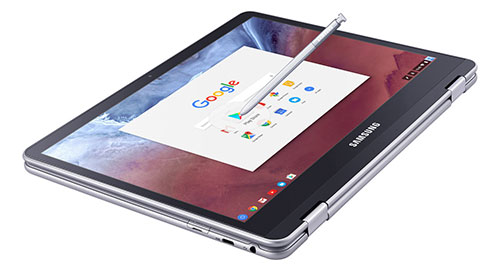 The Chromebook Pro sports an Intel Core M3 processor, 6Y30 (0.90 GHz up to 2.20 GHz, 4 MB L3 Cache), while the Chromebook Plus has an ARM-based chip inside. The Chromebooks will come pre-installed with Google Play, Chrome and Google Drive.

The Chromebook Plus will be available starting from February for $449 (approx. Rs. 30,500) and the Chromebook Pro will arrive sometime later, and its price will be announced then.

On the other hand, the Samsung Notebook Odyssey is a gaming notebook which comes in 15.6-inch and 17.3-inch models sporting a Full HD Anti-Glare display with Wide-View Angle. It is powered by a 7th Gen Intel Core i7 processor (Quad Core 45W) and has HexaFlow Vent, an advanced cooling and ventilation system that helps the device remain cool. The HexaFlow Vent, which is located on the bottom panel of the device can also be opened to upgrade the storage and memory.

The 15.6-inch variant of Samsung Notebook Odyssey comes in Black and White colors and will be made available in February for $1,199 (approx. Rs. 81,300). However, the 17.3-inch model comes only in Black colour and there are no details about the pricing and availability yet. Stay tuned for more updates!