Hey, a good news for all the Samsung Galaxy fans in the country. Your wait is finally over since the much awaited Samsung Galaxy A8+ is finally launched in India. The smartphone which had already been launched in the markets of Europe and Vietnam has finally made its way into the Indian consumer market. For all of you who are interested in buying the smartphone, the ravishing new Samsung Galaxy A8+ can now be yours at ₹ 32,990. The phone will be available in India as an Amazon Exclusive and will go on sale from 20th January, while the pre-registration will start from today itself.

The latest offering by Samsung, in the upper mid-range phones, the Samsung Galaxy A8+ is available in two variants in the global market, depending on the memory configuration of 4 GB/32 GB and 6 GB/64 GB. But in India, the phone will be available only with one memory configuration of 6 GB RAM/64 GB storage, which is expandable up to 256 GB via microSD. The smartphone’s highlighting feature is its tall 6-inch Full HD+ (2220×1080 pixels) Super AMOLED Infinity display, with 18.5:9 aspect ratio and with 75% screen to body ratio. The Samsung Galaxy A8+ is powered by a 2.2 GHz Exynos 7885 Octa-core (2.2 GHz Dual + 1.6 GHz Hexa) processor backed by a Mali-G71 GPU.

The #GalaxyA8Plus will be available in Black and Gold colours and will be priced at INR 32,990. pic.twitter.com/tSMSf6vjl8

For optics, the Samsung Galaxy A8+ has been equipped with first of its kind dual front cameras created by Samsung, in a 16 MP + 8 MP setup, with a sensor of f/1.9 aperture each. On the rear end, the smartphone has 16 MP camera with larger f/1.7 aperture accompanied by High CRI LED Flash, 1.12µm pixel size, 1/2.8” sensor size, 78° field of vision and 4:3 sensor ratio. At the time of purchase, the dual SIM phone will be loaded with Android 7.1 Nougat, backed by Samsung’s own UX. Though it might sound disappointing, but, most certainly it shall receive the new Android 8.0 Oreo update within no time. The Samsung Galaxy A8+ comes with IP68 rating on the ingress rating scale so the phone is dust and water resistant, for up to 1.5 meters of fresh water for about 30 minutes. 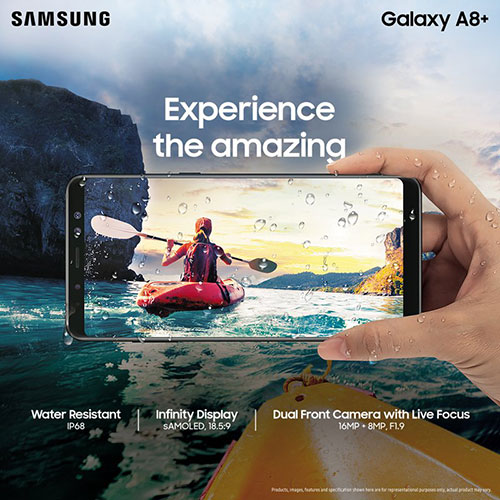 Since every major smartphone manufacturer is trying their hands on an AI-based assistant system, Samsung has loaded the Galaxy A8+ with its new Bixby personal assistant. Along with that, the Samsung Galaxy A8+ will be equipped with a 3,500 mAh battery with fast charging, for power consumption. It also has an accelerometer, barometer, fingerprint sensor, gyro sensor, a geomagnetic sensor, hall sensor, proximity sensor and RGB Light Sensors.

For security, it makes use of the usual, pattern, pin, password lock, fingerprint scanner and face recognition. For connectivity, the phone is reliant on connectivity options like 4G LTE, NFC and Bluetooth 5.0. As far as the build of the smartphone is concerned the phone has a glass and metal body, which measures 159.9 x 75.7 x 8.3 mm and weighs around 191 g and will be offered to the Indian consumers in Black and Gold color variants.