The leaked images of alleged Galaxy J7+ smartphone surfaced online on a website in Thailand, revealing some of the details about it. The images appear to be the promotional material of the smartphone showing the vertically aligned dual rear camera setup. We can also see a single-LED flash below the camera ring.

The leaked images also suggests that the dual camera setup at the rear will consist of a 13 MP ,f/1.7 sensor, coupled with another 5 MP, f/1.9 sensor. The dual cameras will offer the brand’s new Live Focus feature. The smartphone also appears to hold a 16 MP front shooter with LED flash. 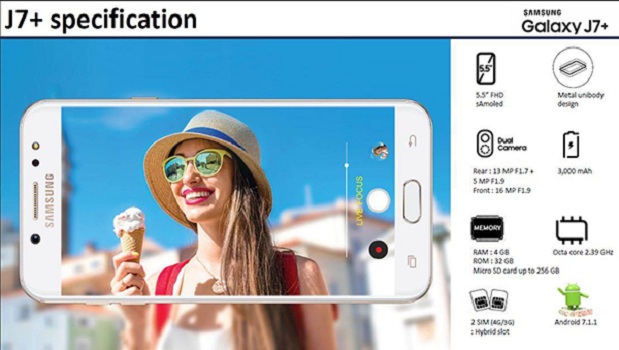 As far as other specifications of the Galaxy J7+ are concerned, the leaked images show that the smartphone will sport a 5.5-inch Full HD (1080 x 1920 pixel) display. It will be powered by a 2.39 GHz octa-core processor, coupled with 4 GB of RAM 32 GB of internal storage which will be further expandable up to 256 GB through a microSD card slot. The smartphone looks to be running on Android 7.1 Nougat and will also come with dual-sim support.

The Galaxy J7+ will hold a metal uni-body and will pack a 3,000 mAh battery to keep things ticking. Although the leaks doesn’t suggest the availability of a fingerprint scanner but we can expect it to be embedded in the physical home button upfront. The smartphone is expected to launch in Thailand soon and will be reportedly available in black, gold and pink colors.