Based on our Scores
Based on Specs & Facts

After resurging in the budget smartphone segment, Samsung has now launched the Galaxy M40 which comes with the same powerful SD 675 processor and is the direct challenger to the budget smartphone king, the Redmi Note 7 Pro. While both the Galaxy M40 and Redmi Note 7 Pro have their pros and cons, which you can read in our separate posts, there are 3 major factors – display, UI & price which differentiates the two; rest other things are more or less similar.

Finally, to sum it up, whether to go for the Galaxy M40 or the Redmi Note 7 Pro depends primarily on which ecosystem you want to go into, Samsung’s or Xiaomi’s. While Samsung’s charges you more premium, it also delivers a more premium user experience especially with its hole punch style Infinity O Display and the One UI, which are reasons enough if you are willing to spend some extra amount, otherwise the Redmi Note 7 Pro has a leading edge in terms of cameras, build, battery, price and is close to perfect for its price. 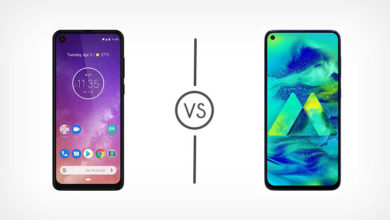 Motorola One Vision VS Samsung Galaxy M40: Two phones with hole-punch display, which one to buy?