Samsung is all set to unveil its flagship Galaxy Note 8 at the ‘Galaxy Unpacked’ event on 23rd August. While there have been several leaks about the smartphone previously, we now get to see its first leaked press render giving us a proper idea about how the smartphone will look.

The press render of Galaxy Note 8 has been posted by tipster Evan Blass, which shows the smartphone in Midnight Black color holding an end-to-end bezel-less design called the Infinity Display as we have seen in previous leaks. We can also see all the sensors such as Iris scanner and front camera on the top, along with the volume rocker and a dedicated Bixby button on the left side and the power button on the right.

Apart from this, another leaked render obtained by Forbes, shows the smartphone from all the sides leaving no questions about the design. In the image the smartphone holds a horizontally alignment dual rear camera with a not so comfortably placed fingerprint scanner which is beside the camera on the rear panel as we have seen many leaks prior to this. 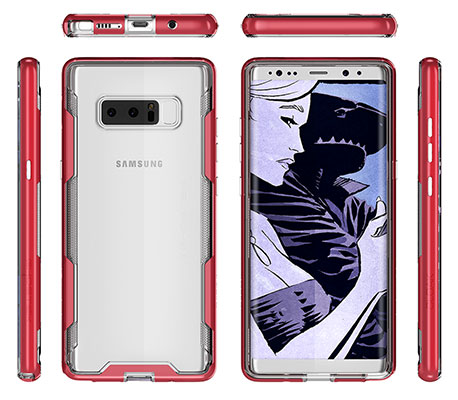 The bottom of the device would have the USB Type-C port, a 3.5 mm headset socket, speaker and cavity for the S pen stylus, again some thing that we’ve seen in previous leaks.  The smartphone is also expected to come with a heart rate sensor and a face recognition sensor.