Samsung made an announcement somewhere in the last week that they are about to launch their latest premium mid-range phone the Samsung Galaxy A8+ smartphone in India, with no official date of launch set for the same.  In keeping up with the order of the things, news’ coming in that, another mid-range phone is also in the pipeline and is all set to launch in India pretty soon. And this smartphone is none other than the Samsung Galaxy On7 Prime, priced at somewhere around ₹ 15,000 approximately. As per the announcement, Samsung will be launching the Galaxy On7 Prime smartphone in the country exclusively on Amazon India.

The dedicated page on Amazon for the Samsung Galaxy On7 Prime, lists some important specifications of the phone in India. The smartphone will feature a 5.5-inch full-HD (1080×1920 pixel) display and will run on a 1.6 GHz octa-core Exynos 7870 processor with ARM Mali-T830 MP2 GPU. The phone will be available to the Indian consumers in two variants, with memory configurations of 3 GB RAM/ 32 GB internal storage and another variant with 4 GB RAM/ 64 GB built-in storage, both of which are expandable up to 256 GB via microSD. The phone is expected to be preloaded with Android 7.0 Nougat, but most probably, should receive an Android 8.0 Oreo update soon. 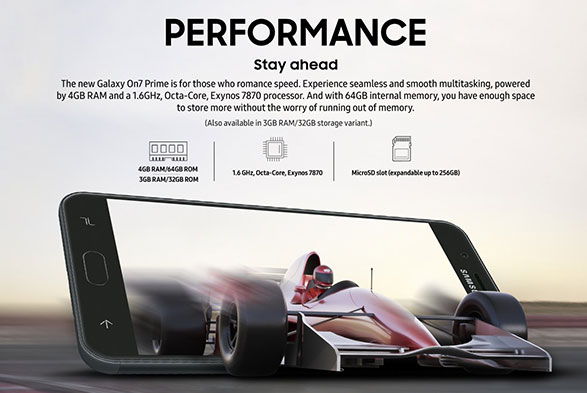 Going by the specifications mentioned on Samsung’s UAE website, consumers can also expect the Indian version of Samsung Galaxy On7 Prime, to be equipped with a 13 MP rear camera with f/1.9 aperture size and LED flash, and a 13 MP front-facing camera optimised for taking wide-angle selfies. The phone will most likely be powered by 3,300 mAh battery, dual-SIM functionality, and also a dedicated slot for microSD card. For connectivity, the phone is dependent upon Wi-Fi b/g/n 2.4GHz, Wi-Fi Direct, 4G, Bluetooth 4.1, ANT+, Micro-USB 2.0, and as well as a 3.5mm audio jack. As for the dimensions of the phone are concerned the phone measures 151.7 x 75 x 8mm and weighs 167 grams.

Till now, these are the possible specifications of the On7 Prime smartphone, which will go on sale in India soon. More will be known about the smartphone, once it officially goes on sale in the country. Since the company has already announced the arrival of the Samsung Galaxy A8+, it can be expected that both the phones will be launched together, soon, at an event which is about to happen next week in New Delhi. So till then, interested buyers can go to the Amazon website, and sign up for receiving notifications about the official launch and the subsequent exclusive sale of the Samsung Galaxy On7 Prime.