Samsung had announced the arrival of the Samsung Galaxy On7 Prime on the 9th of January, and it was supposed to go on sale soon. Today at an event that took place in Gurugram, Samsung India has officially launched the smartphone for the Indian consumer market. The Galaxy On7 prime, which is priced starting at Rs. 12,999 will go on sale exclusively on Amazon.in and looks like a worthy rival to the similarly priced Honor 9 Lite which was launched earlier today.

Talking about the specifications of the smartphone, the Samsung Galaxy On7 Prime features a 5.5-inch Full HD (1920 x 1080 pixels) display with 2.5D curved glass on top. The smartphone is loaded with 1.6 GHz Octa-Core Samsung Exynos 7870 64-bit processor for computing and for graphics support uses an ARM Mali-T830 MP2 GPU. For optics, the Samsung Galaxy On7 Prime has been equipped with 13 MP rear camera with f/1.9 aperture lens and LED flash, and a 13 MP front-facing camera optimised for taking wide-angle selfies. Based on the storage configuration, the Samsung Galaxy On7 Prime will be available to the Indian consumers in two variants of 3 GB RAM/ 32 GB storage and another variant with 4 GB RAM/ 64 GB storage, both of which are expandable up to 256 GB via microSD. The smartphone comes with Android 7.1.1 Nougat with Samsung’s Experience UI running on top and promised Android Oreo update in the future.

Presenting the new #GalaxyOn7Prime, a smartphone that combines refined design and enhanced performance for a smarter life. 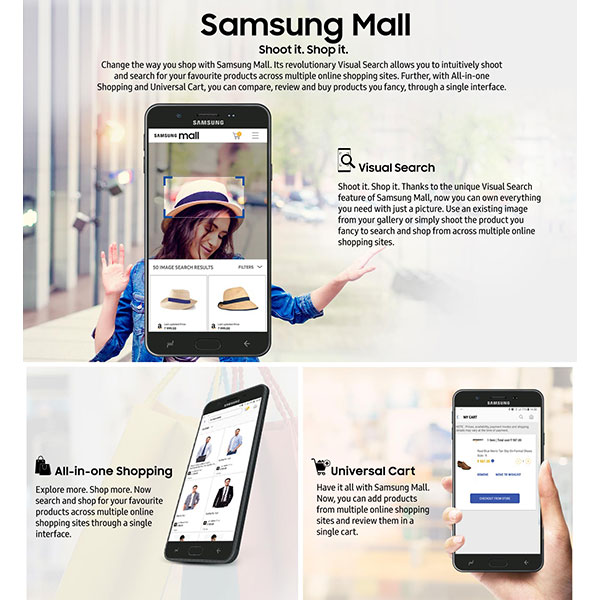 Along with this, the Galaxy On7 Prime comes with Samsung Mall, which offers the facility of performing, Visual search just by clicking an image of any product, using machine learning. In order to make this application convenient for the users, Samsung has formed ties with Amazon, Jabong, Shopclues and Tata Cliq so that consumers can search across these stores and add the products to their cart. Samsung Mall can work via its dedicated app, or directly from the camera and gallery apps. The application makes use of what the company calls an intelligent assistant, it’s different from Samsung’s in-house virtual assistant Bixby.