The new Glossy Black variant of Samsung Galaxy S7 Edge is leaked in live images on popular Chinese microblogging site, Weibo from a China-based Samsung official who shows the glossy black device from all possible angles. This move from Samsung might be an attempt to take on recently launched Apple’s Jet Black and Black iPhone 7 variants.

The leaked images show the black metal chassis of the device and even a regular Galaxy S7 Edge appears in the background next to the glossy black version. The most distinct difference of the glossy black colour is that the metal frame on the edges are now also coated black instead of being silver which makes the handset look even sleeker and more elegant. 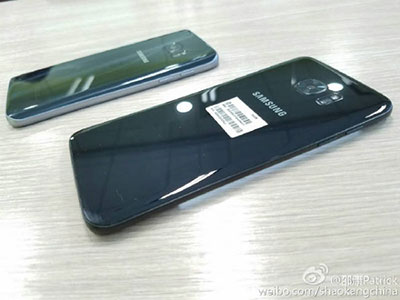 Samsung is surely trying to cover up on the loss of Galaxy Note 7 by introducing new colour variants of its successful Galaxy S7 range. The new Glossy Black variant of Galaxy S7 Edge is expected to arrive sometime in December.

Samsung is also reportedly working on its next flagship, the Galaxy S8 which is reported to come with a built-in AI assistant that would allow customers to use third-party service seamlessly. It is also expected to house Qualcomm’s latest Snapdragon 835 processor.