Best Tech Guru’s Smartphone Buying Guide is one of the best in India and it greatly helps buyers in picking the right phone for themselves. It is the most consistent smartphone buyer’s guide in India, with posts regularly updating every month since January 2014. Over all these years, we have and we still constantly try to improve our Buyer’s Guide and make it more and more useful for the readers and due to these attempts, our Buyer’s Guide includes lots of new features. And to help our readers understand the Buyer’s Guide completely, we have compiled the list of most Frequently Asked Questions:

1. When the Smartphone Buying Guide is updated?

Ans: We update the Smartphone Buyer’s Guide every month and we try our best to update all the posts on the 1st day of the new month.

2. How many phones you consider to include in the Top 10?

Ans: We consider each and every phone by all companies in every price range each month to make sure that we don’t miss a good phone or a phone which has seen a recent price cut and has now become worth buying.

4. How many phones of a same company can be included in the list?

Ans: If any company has two or more phones available around the same price, we will include the best out of them in the rankings and will suggest the other phones from the same company as alternative(s). But, if more than one phone from the same company is worth buying and is offering something different, we may include more than one phone from the same company. And there is no particular limit for this. In the past, in the under Rs. 15,000 list, 3 phones from Lenovo and 1 phone from Motorola (which is also owned by Lenovo) were included in the Top 10, which means, basically there were 4 Lenovo phones among the Top 10. So, this depends on the merits and features of the devices.

5. In a phone’s review, what does the bold text starting with “Overall..” means? 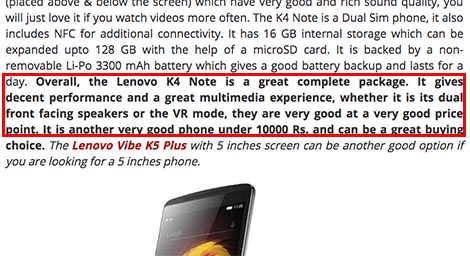 Ans: The bold text starting with “Overall” sums up the review for that phone. It is the conclusion and often tells whether a phone is worth buying or not. It also informs that, for which types of users the phone will be a good buy.

6. At the end of a phone’s review, what does the text in italic means? 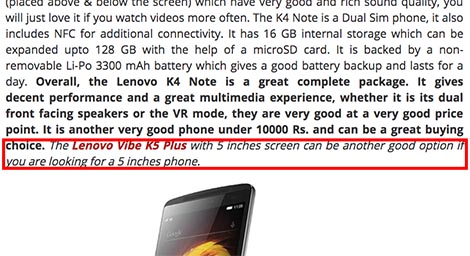 7. What are the Green Badges above a phone’s name?

Ans: The Green badges indicate that it is a very successful phone and either it is on the top of the list or it had topped the list at an earlier time period. The badge also specifies a time period for which the phone is/was on top.

8. What are the Red Badges above a phone’s name?

Ans: The Red Badges indicate that the phone is newly launched (often launched in the previous month) and is include in our list for the first time.

Ans: Our list include the Top 5, Top 7 or Top 10 phones in a given price range depending upon the quantity of good phones at that price range. However, due to the crazy competition in the smartphone market in India, there can be phones which couldn’t make it into the Top 5/7/10 but they can still offer some value. So, we include such phones under “Few more…” at the end of the posts to inform buyers that there are more options also but at the same time, we advise buyers to go with the Top phones only to get the best out of their money.

10. Do we get money from any brand to rank their phones higher in the list?

Ans: Not at all. We do not accept any kind of money/sponsorship for the rankings. The rankings are always based on the merits of the devices and we are proud to say that, from the beginning, we have never ranked any phone higher/lower for money. We believe, people read our lists to get correct information, otherwise there are lots of advertisements, misleading and influential content already everywhere. So, we have stood true to our readers and we will stand true forever.