The iconic Mario game, now revised as Super Mario Run is released by Nintendo for iOS devices, which includes iPhones, iPads and iPod Touch. The game was announced on 7th September at the launch of Apple’s latest flagship phones, the iPhone 7 and iPhone 7 Plus.

Super Mario Run is designed for one hand play and it is a bit different from the traditional Mario game. Unlike the older one, you do not control the forward movement of the character, as he constantly keeps moving forward while you jump to navigate. Mario will behave differently depending on the timing of your taps, so it’s up to you to show off particularly smooth moves, gather coins, and reach the goal.

To play Super Mario Run, you will need an active Internet connection. It is worth noting that all users can download the game for free, but get limited access to each mode in the game. The game has three modes of play which are available as a free demo:

1. World Tour – In this game mode you run and jump to reach Princess Peach and rescue her from Bowser’s clutches. You will be travelling through plains, caverns, airships, castles, haunted houses and more. You can clear 6 worlds filled with 24 new courses.

2. Toad Rally – In this mode you can show off Mario’s stylish moves, challenge people from around the world and compete against your friends. It also has a challenger mode where the competition differs each time you play. Compete against the stylish moves of other players for the highest score as you gather coins and get cheered on by a crowd of Toads. If you’re impressive enough, the Toads may even come live in your kingdom. You can also perform moves to fill up your gauge and launch into Coin Rush.

3. Kingdom builder – You can gather coins and Toads to build your very own kingdom. Create your unique kingdom with buildings and decorations that you acquire with the help of Toads gathered in Toad Rally. With the help of the friendly Toads you impressed through Toad Rally, you can build up and customise your kingdom to make it bigger and better. 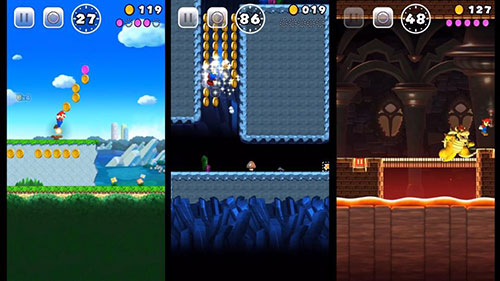 For us, we view our software as being a very important asset for us. And also for consumers who are purchasing the game, we want to make sure that we’re able to offer it to them in a way that the software is secure, and that they’re able to play it in a stable environment.