The fact that WhatsApp is planning to launch its peer-to-peer payment service in India has been creating fair amount of buzz from a while and the latest reports indicate that we might not have to wait too long for it to arrive. The service is apparently available now in the beta version of WhatsApp in Android. 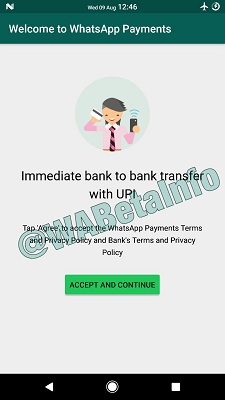 Previously it was reported that, WhatsApp is apparently in talks with SBI and NPCI for Unified Payments Interface (UPI) integration in India. Due to the complexity of the architecture, WhatsApp was in discussions with the State Bank of India, NPCI and few other banks to devise ways to integrate their systems with the bank and with NPCI. WhatsApp at that time was at ‘proof of concept’ stage, and was looking at ways to integrate with the back-end which now seems to have sorted out.

We’ll keep you updated with more on this and other tech news, stay tuned!