It’s been a long way for Xiaomi Mi 6 smartphone amongst a ton of leaks, rumours and speculation. There is finally some thing that will put an end to all of this. The Xiaomi Mi 6 is going to be launched in this month itself. While rumours suggested the same, this time there’s an official conformation from the CEO of the company itself. The CEO Mr. Lei Jun conformed the arrival of the smartphone during a live video chat with Mi fans. The company may be launching the phone on 11th, 16th or 18th April, however there aren’t any press invites or conformations regarding the date of launch.

Besides the conformation of the Mi 6 to be launching this month, it seems that the leaks aren’t gonna stop till the Mi 6 is actually launched. There’s another leak spotted online which reveals the price of the smartphone. The latest leak consists of screen shots from a popular Chinese e-commerce website Jingdond. 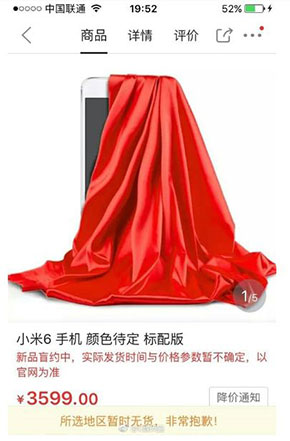 If the leaks are to be considered, the top end variant of the smartphone will be priced at CNY 3,599 (Rs. 36,000 approx) along with several other variants below it. If this leak comes out to be true then the Mi 6 will become the most expensive smartphone from Xiaomi, which is surprising because the company is known for its competitive prices.

Recently, there was another leak which showed the images of the retail box of the smartphone which revealed the camera and hardware specifications. According to the retail box specs, the Mi 6 will bear a 30 MP rear camera and the Snapdragon 835 processor with 6 GB RAM and 128 GB internal storage. The leaked brought out a lot of important information but also raised many questions regarding the detailed specifications of the camera. Well that being said, there’s not much time left when the smartphone will be lunched and we’ll find which of the leaks and rumours were true.

Speaking of Xiaomi, the company has scheduled the ‘Mi Fan Festival’ on 6th April in India, where there’s a lot to grab for the Mi India fans. In this fan fest, the Xiaomi Redmi Note 4, the Redmi Note 4A and other Xiaomi products will be available for just Rs. 1 during a flash sale. Make sure you have the Mi Store app on your smartphone and have registered yourself to be a part of Mi Fan Festival sale.